I love spring in Utah. The cold releases its grip and the cycle of life liberally expresses itself as both plants and animals, especially the birds, reappear in beautiful colors. The desert blooms and suburban areas burst with all sorts of colors as the trees blossom with white, pink, yellow and purple flowers. Flocks of starlings disappear and are replaced by flocks of gulls, pelicans, and ibises as they migrate to their annual breeding grounds.

As I was walking home from church this afternoon I saw something that others passed without notice. It was a very common bird, but it was in its spring plumage and surrounded by beautiful white pear blossoms as it perched at eye level in my next-door neighbors yard.

As I was driving home from work on Friday is decided to pass through an agricultural field outside the small town of Lehi to see what migrant birds might be taking advantage of the watered fields. I pulled over at one point and spent some time watching and photographing the birds that were temporarily stopping over. I saw some Franklin's Gulls and White-faced Ibises flying over and foraging in a farmer's field.

I decided to spend some time photographing the gulls in flight. White and black birds are always tough when it comes to getting the proper exposure. All my images are captured in jpeg files rather than raw so if I mess up in the field there is very little fixing that can be done afterward. Less exposure is needed for the whites so details don't get washed while more exposure is needed for the darks in order to draw out the details. The Franklin's Gulls flew by and over me often enough that I was able to practice getting the right distance, exposure, and timing.

This Solitary Sandpiper was found in an over-watered corner of a farmer's field where I stopped to photograph the gulls. 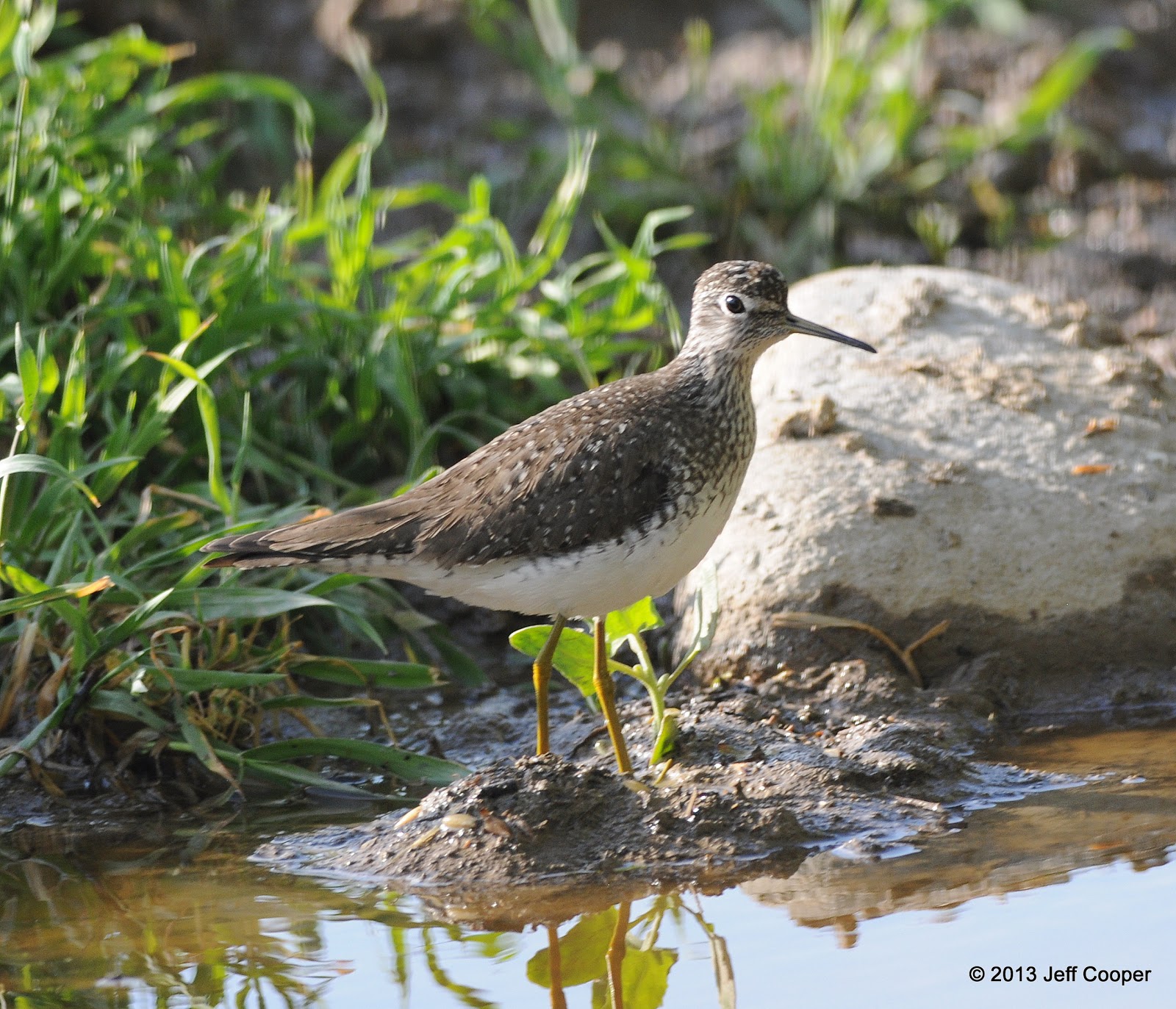 My wife and I took a short drive up American Fork Canyon on a previous weekend and stopped at Tibble Fork Reservoir to enjoy the awesomeness of our local mountains surrounding a small reservoir. A lone White-faced Ibis was wading along the edge of the reservoir. It's an unlikely location for this bird, but it was probably resting from a migratory flight across the mountain range.

Yesterday, on my way to join the Utah County Birders for a local field trip, I happened to see Snowy Egrets and a very unexpected female Hooded Merganser hunting for fish in a tiny pond. I parked my truck on the side of the road and managed to move from the driver seat to the passenger seat without exiting the truck and spooking them. I lowered the window and placed a bean bag across the door so I could stabilize my camera lens to avoid camera shake. 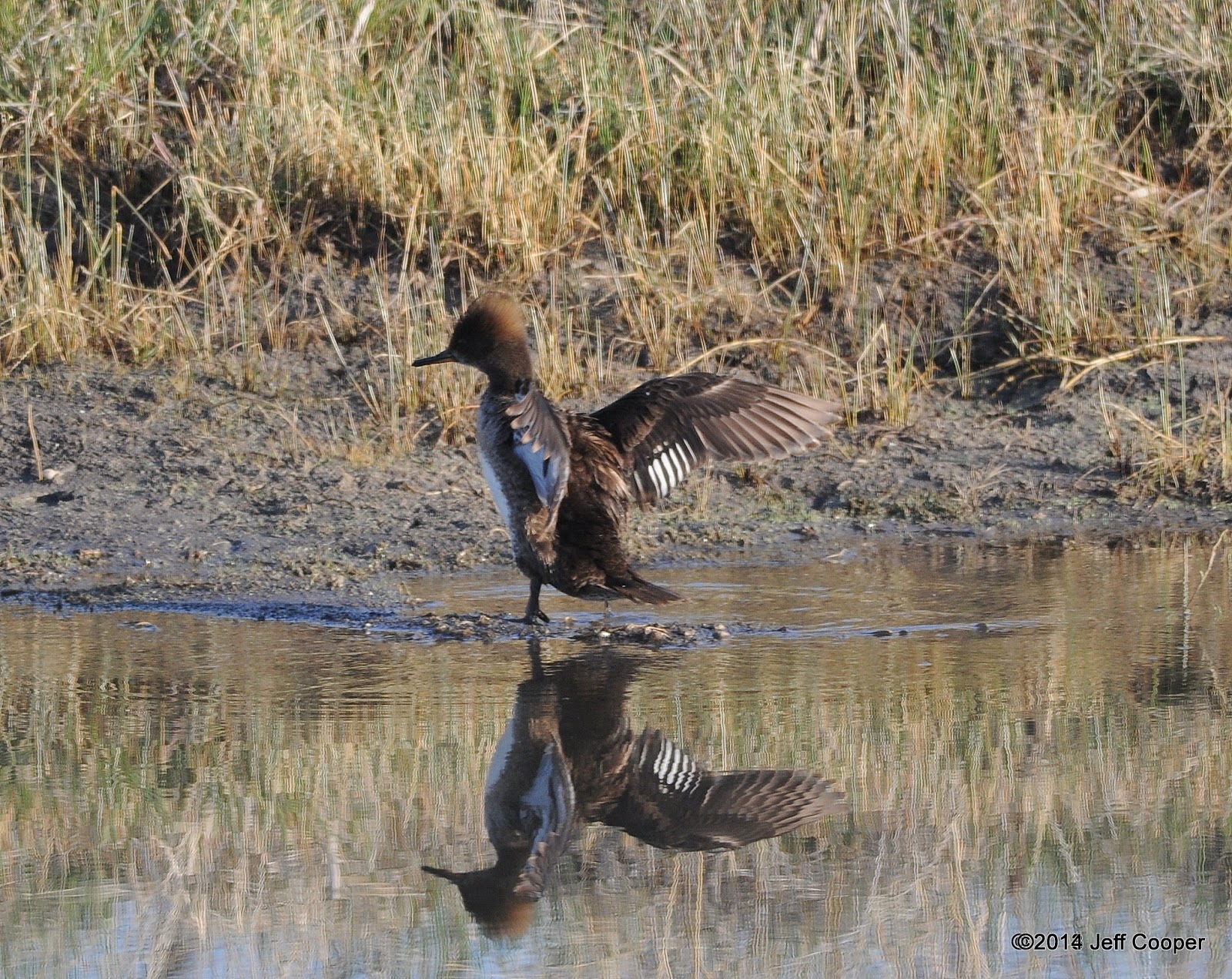 I first focused on the Hooded Merganser as a matter of documenting a duck that is uncommon in Utah during the winter months and really rare for the month of May. Fortunately for me, there was a female Common Merganser on the pond as well and it provided an excellent frame of reference for determining size. I was able to see the size difference between the two. The Hooded Merganser's length is about 18 inches and the Common is about 25 inches.

The first image (to the right) was captured to show 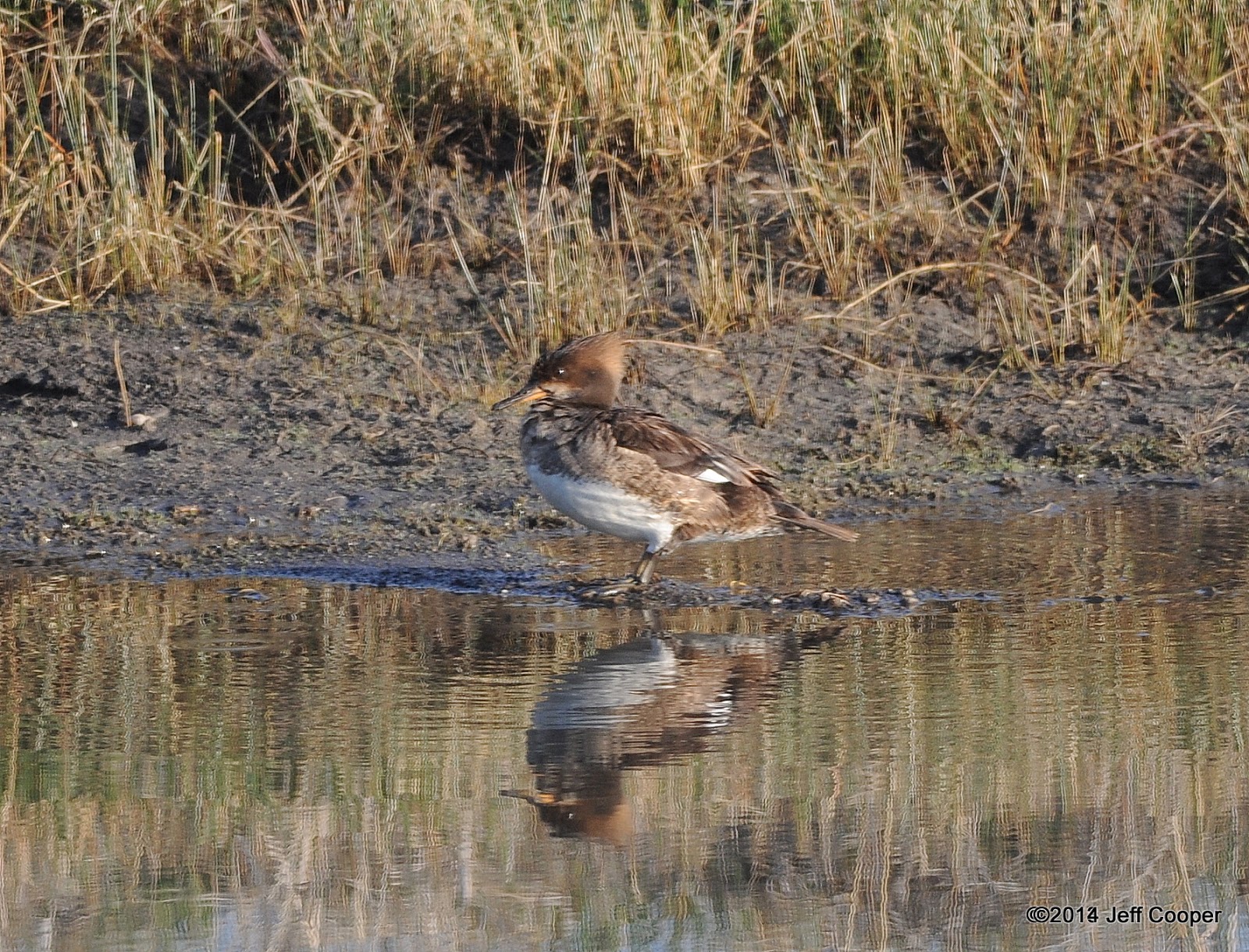 the head profile and wing pattern. The female Hooded Merganser's hairdo is more rounded when compared to a Red-breasted's hairdo which is more  wispy or somewhat jagged and uneven. The bill of both Hooded and Red-breasted is thinner that what you see with Common Merganser's. However, the bill of a Red-breasted is reddish orange while the Hooded's is mostly dark with some yellow, especially on the lower mandible. 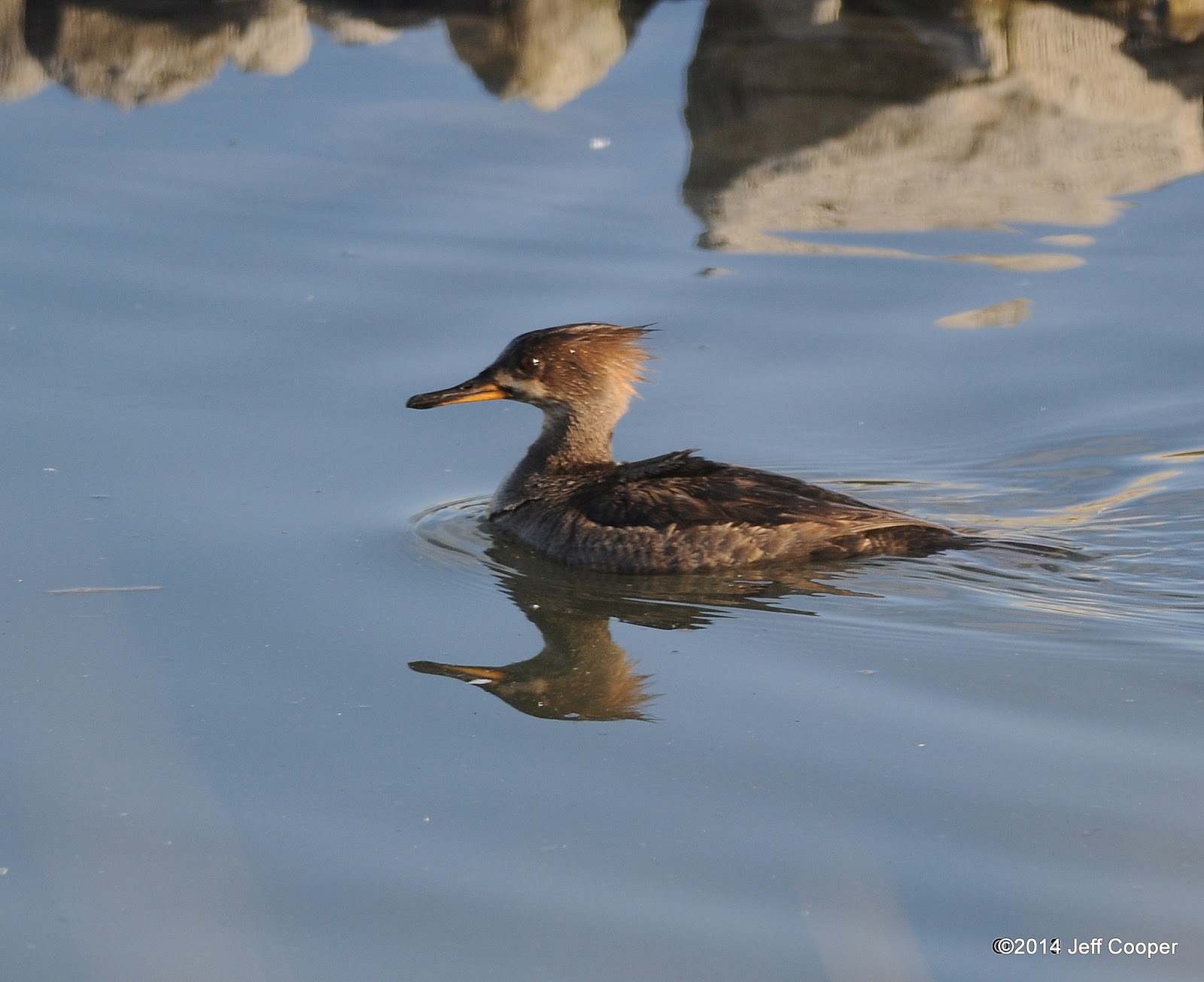 You can see the smooth, rounded hairdo in the first two images. This last image shows how the hairdo can be altered when wet. The merganser had just come up from a dive before I captured this image. She is showing a look here that is more like a Red-breasted or Common Merganser. Sometimes identifying similar birds requires multiple views from various angles. That's why a single photo of a bird can sometimes make identification difficult for even experienced birders.

Another wonderful experience came from watching a more common spring bird that can also present a challenge for photographers because it is almost all white. This series of photos shows a Snowy Egret hunting, locating, chasing, and swallowing a fish. The faint brown lines you see in some images are severely out of focus phragmite stems that were between me and the bird. 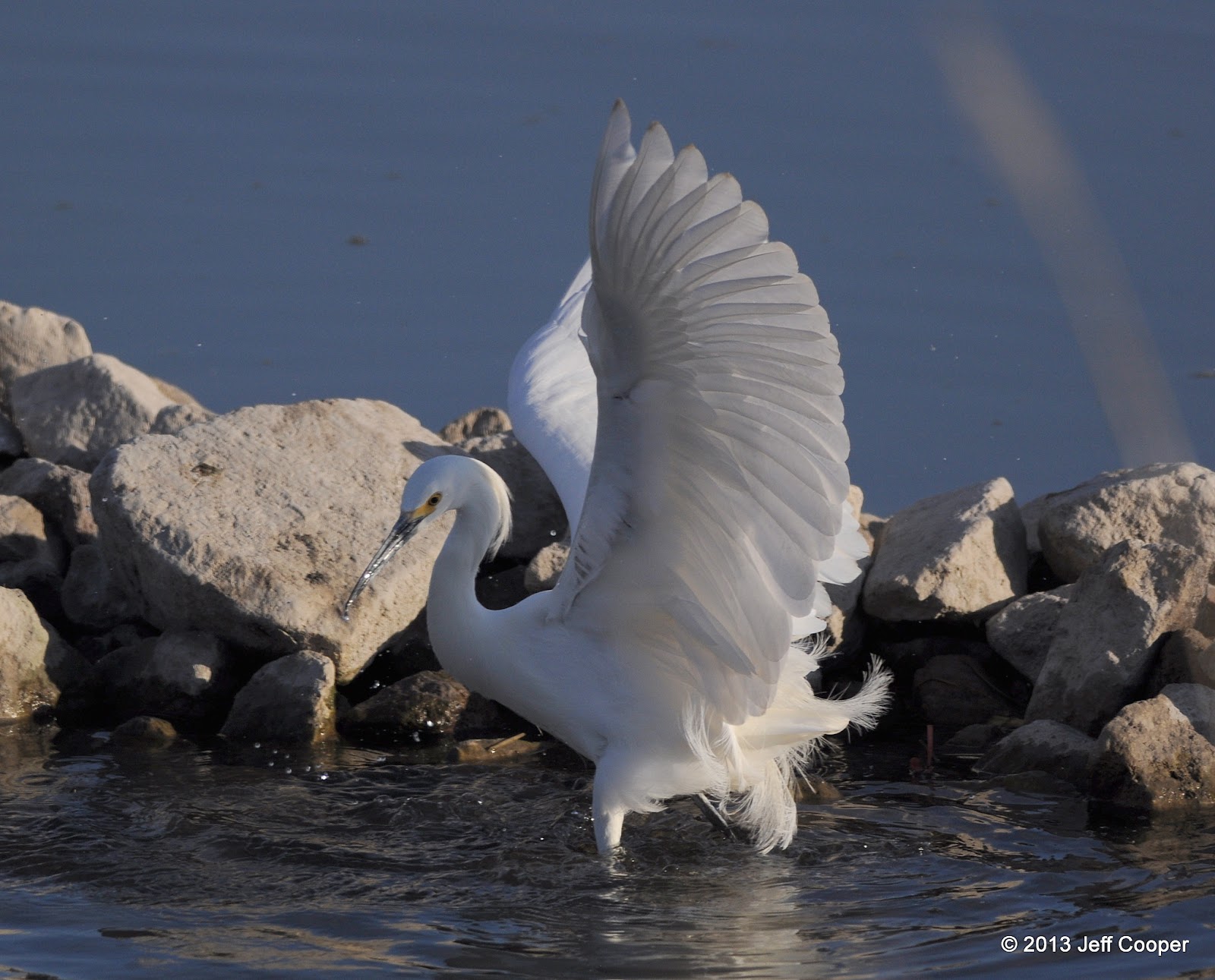 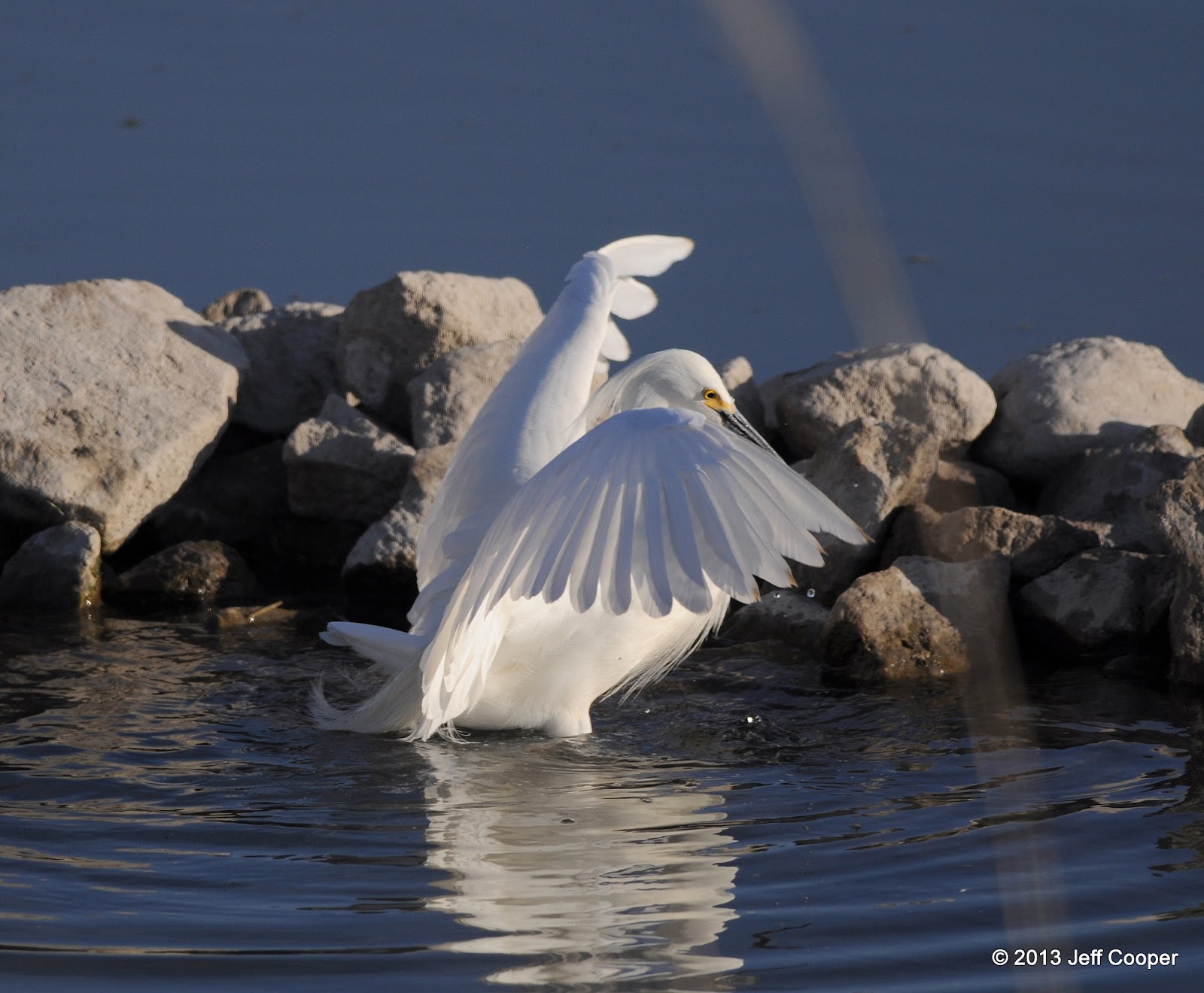 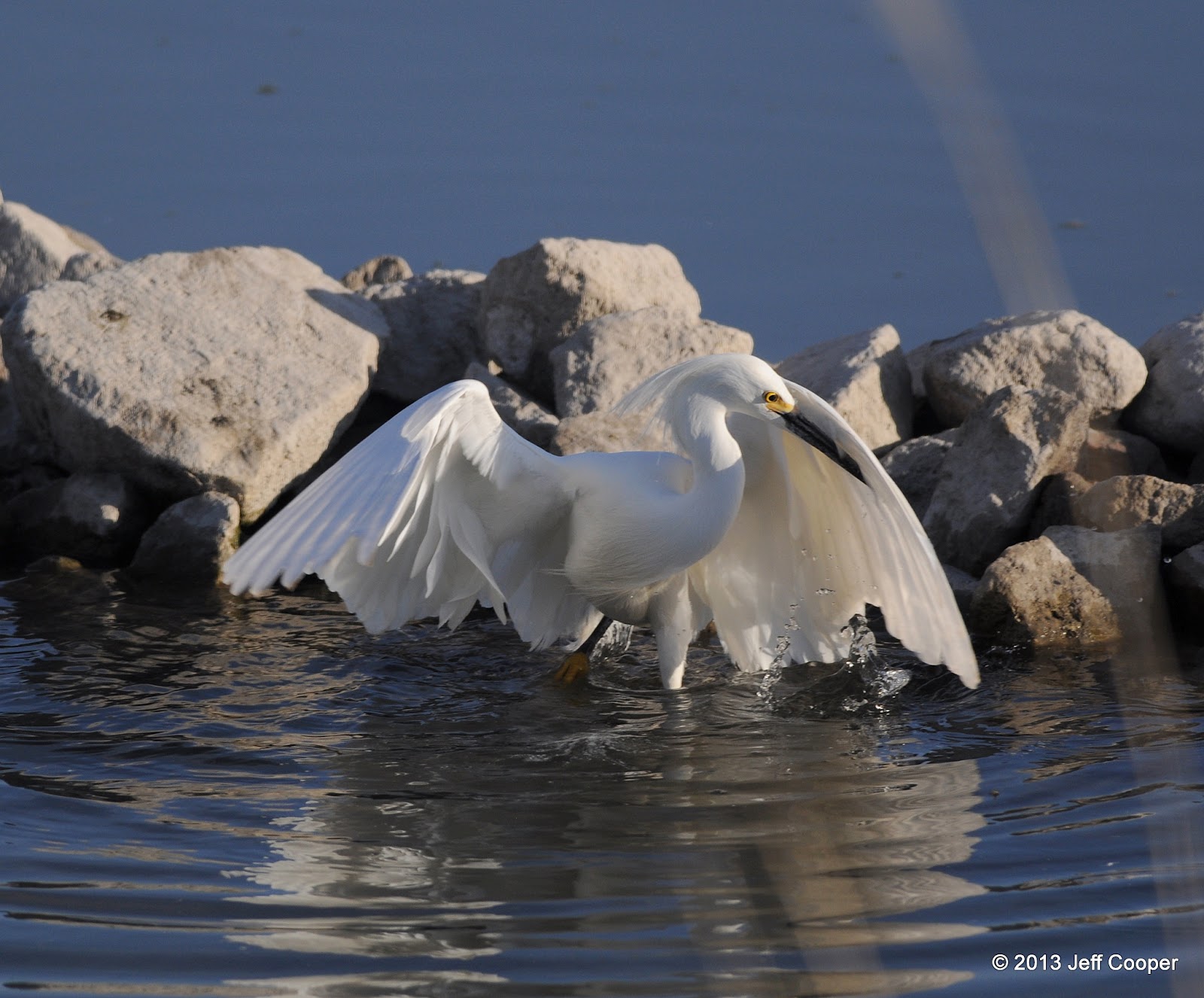 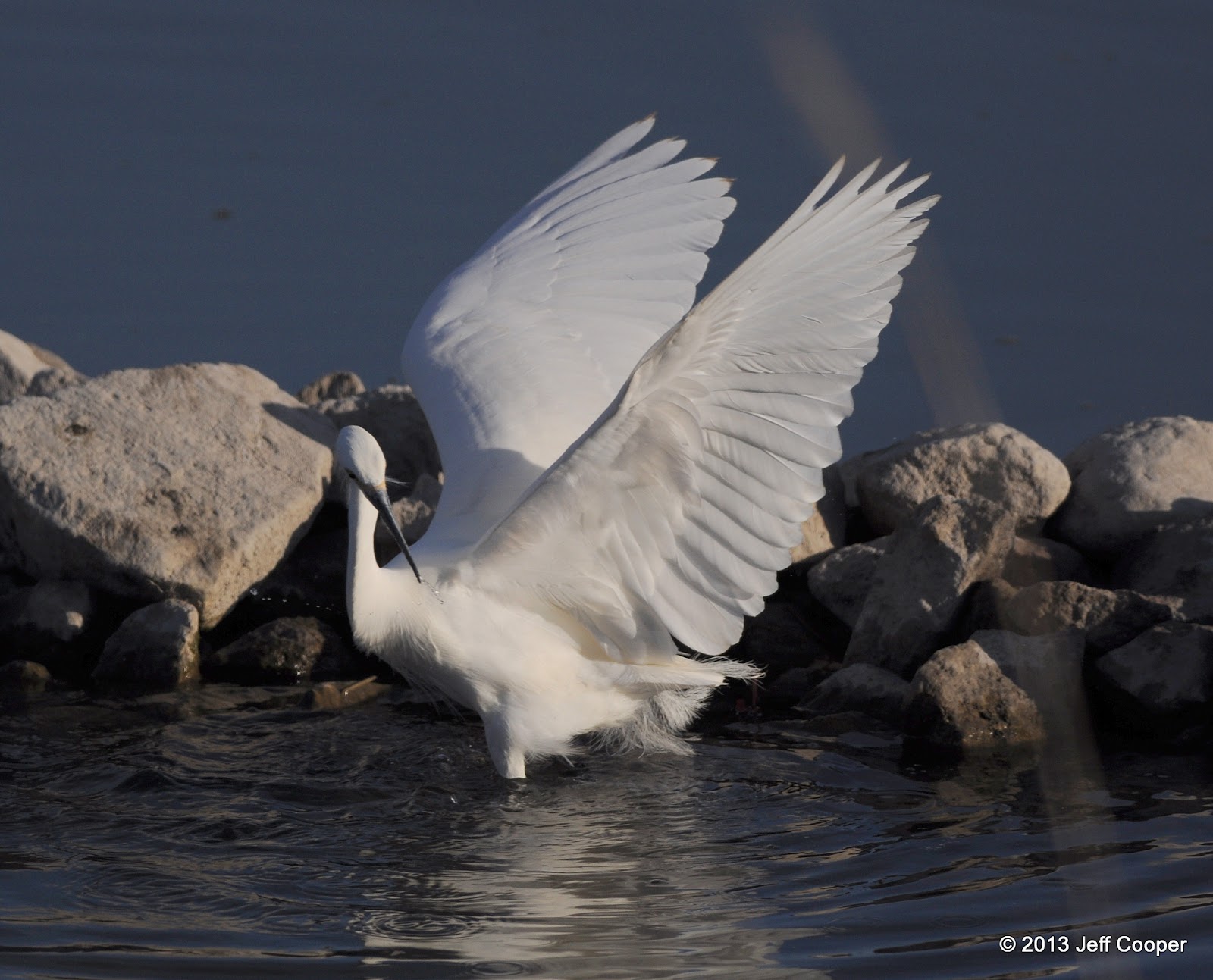 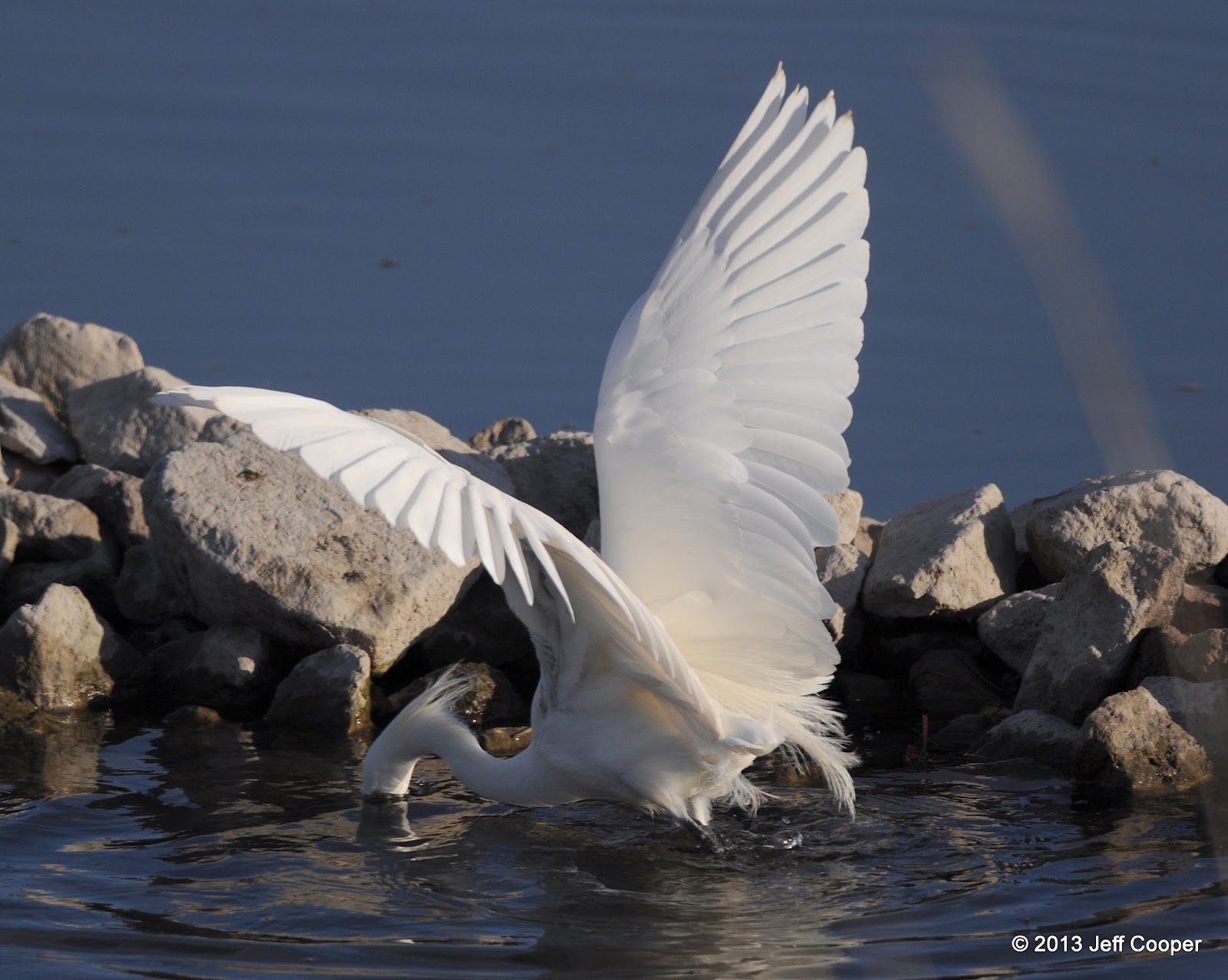 Adjusting the fish so it will be swallowed head first so it goes down easily and with the pokes of the sharp fins. 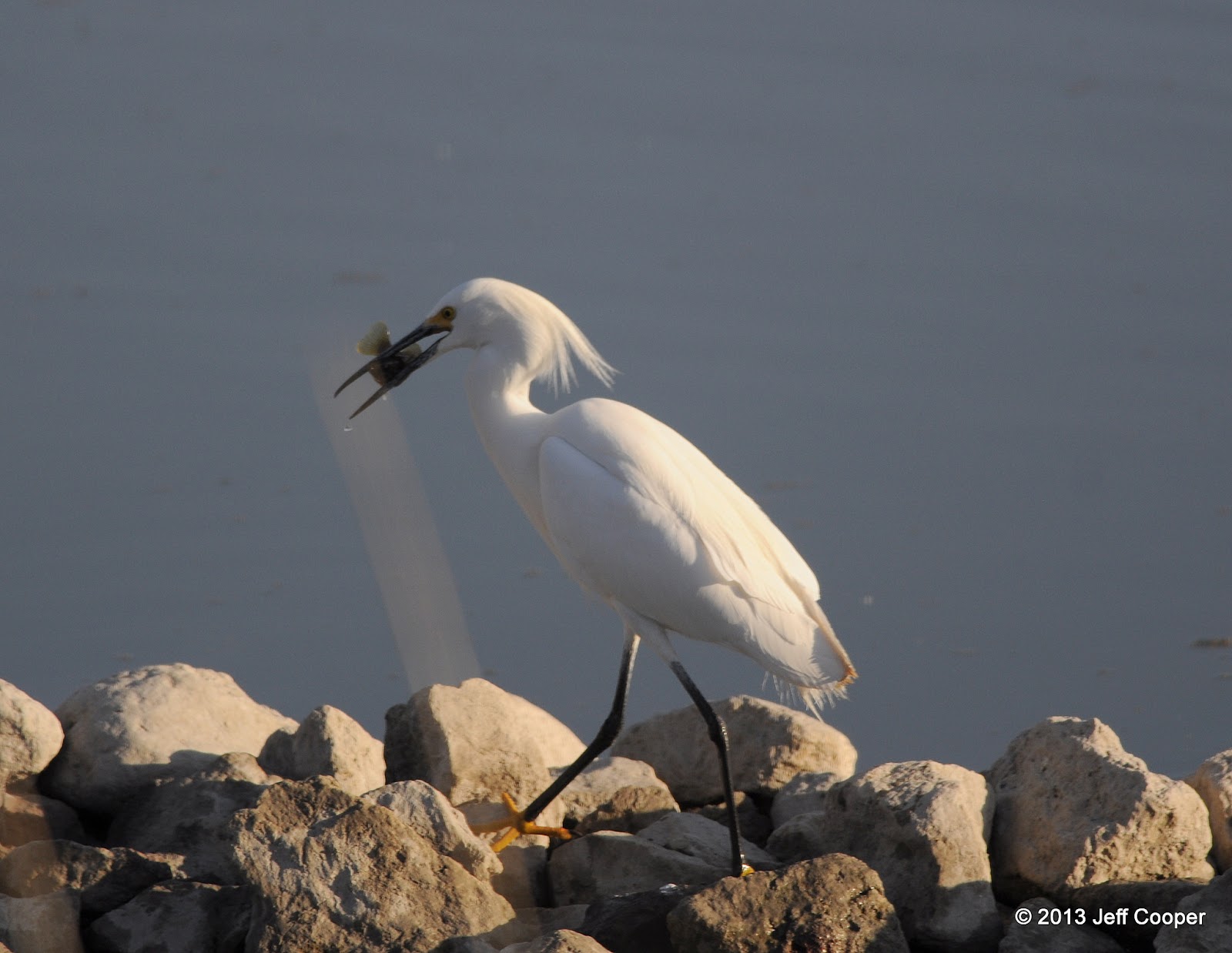 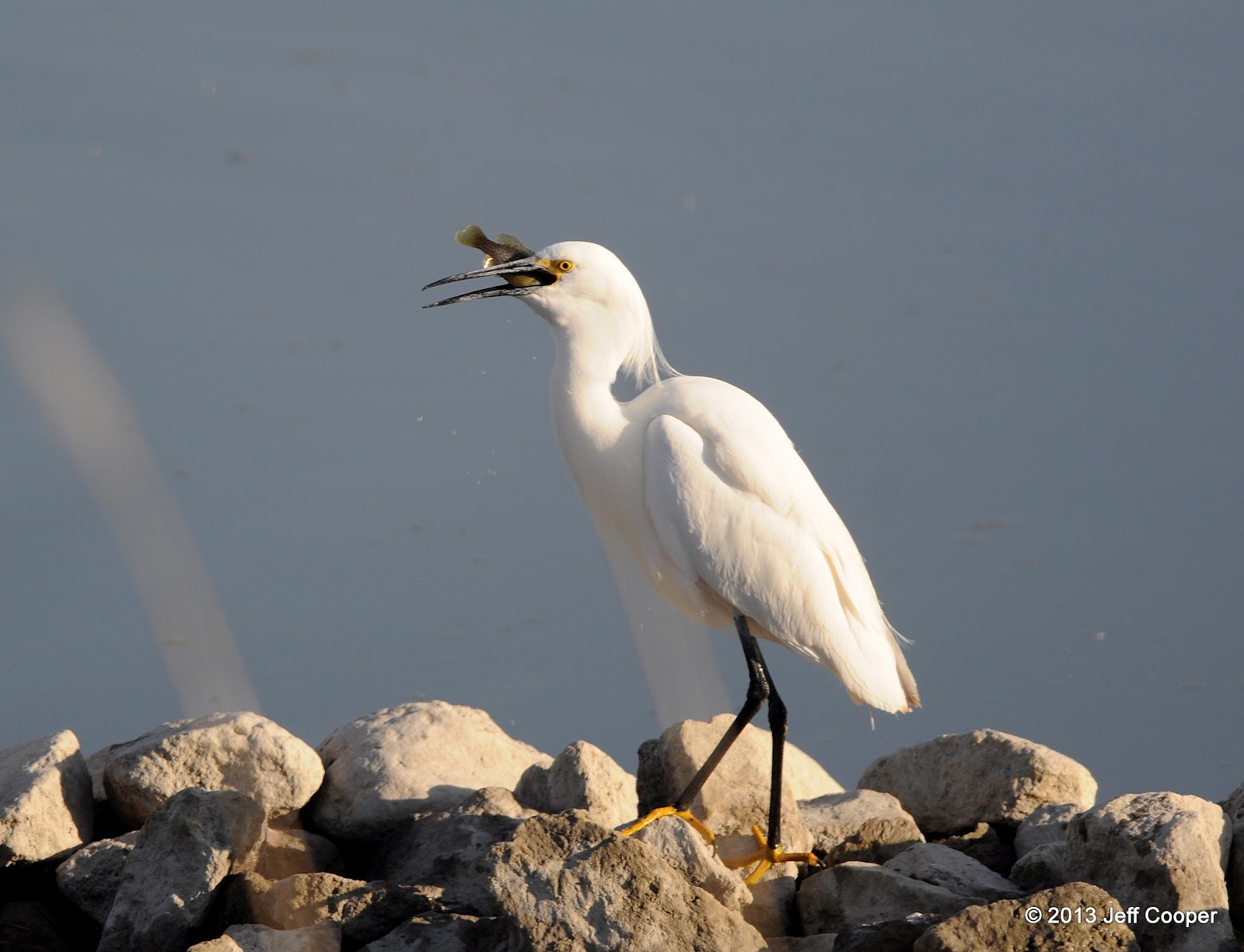 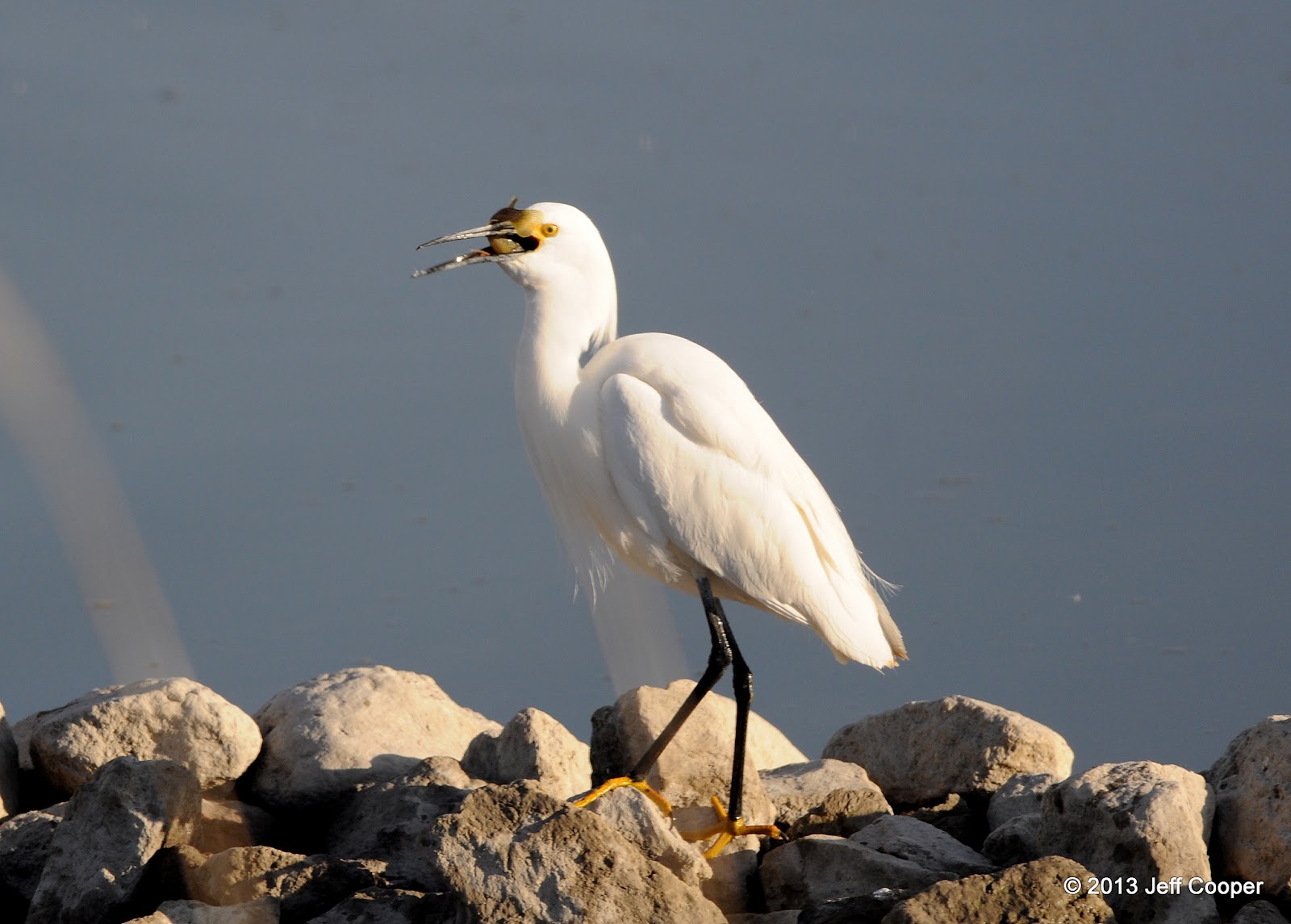 A single gulp and down it goes! 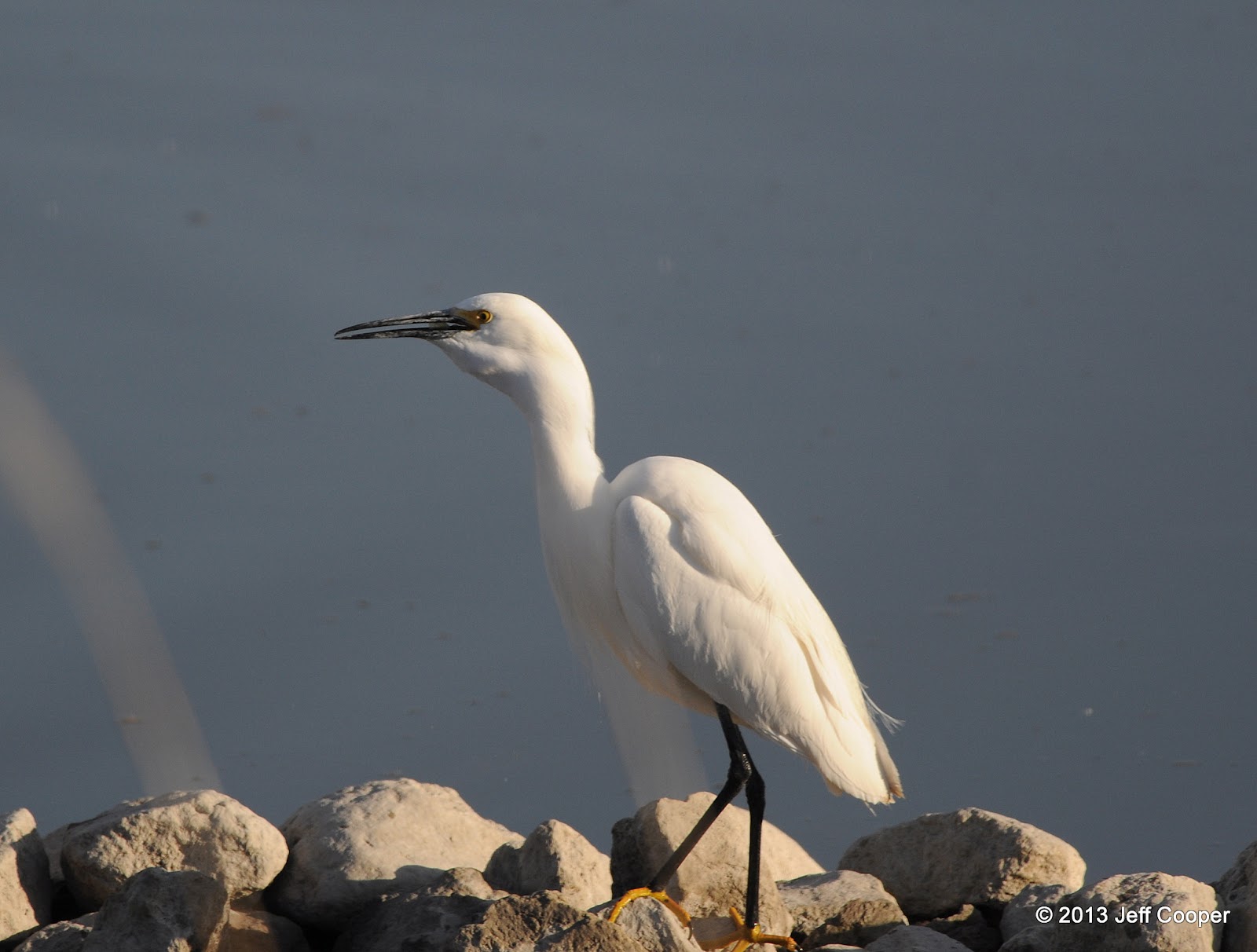 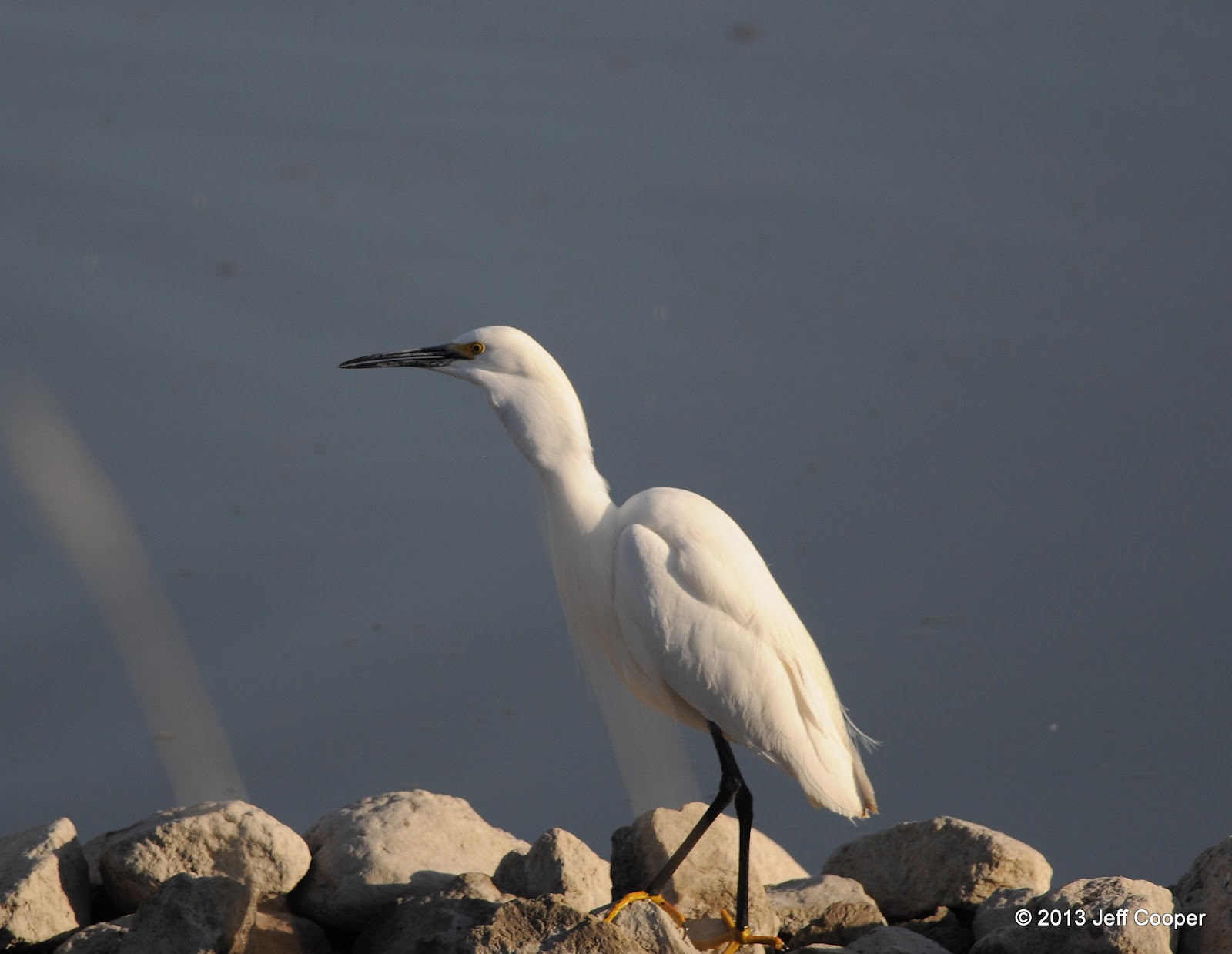 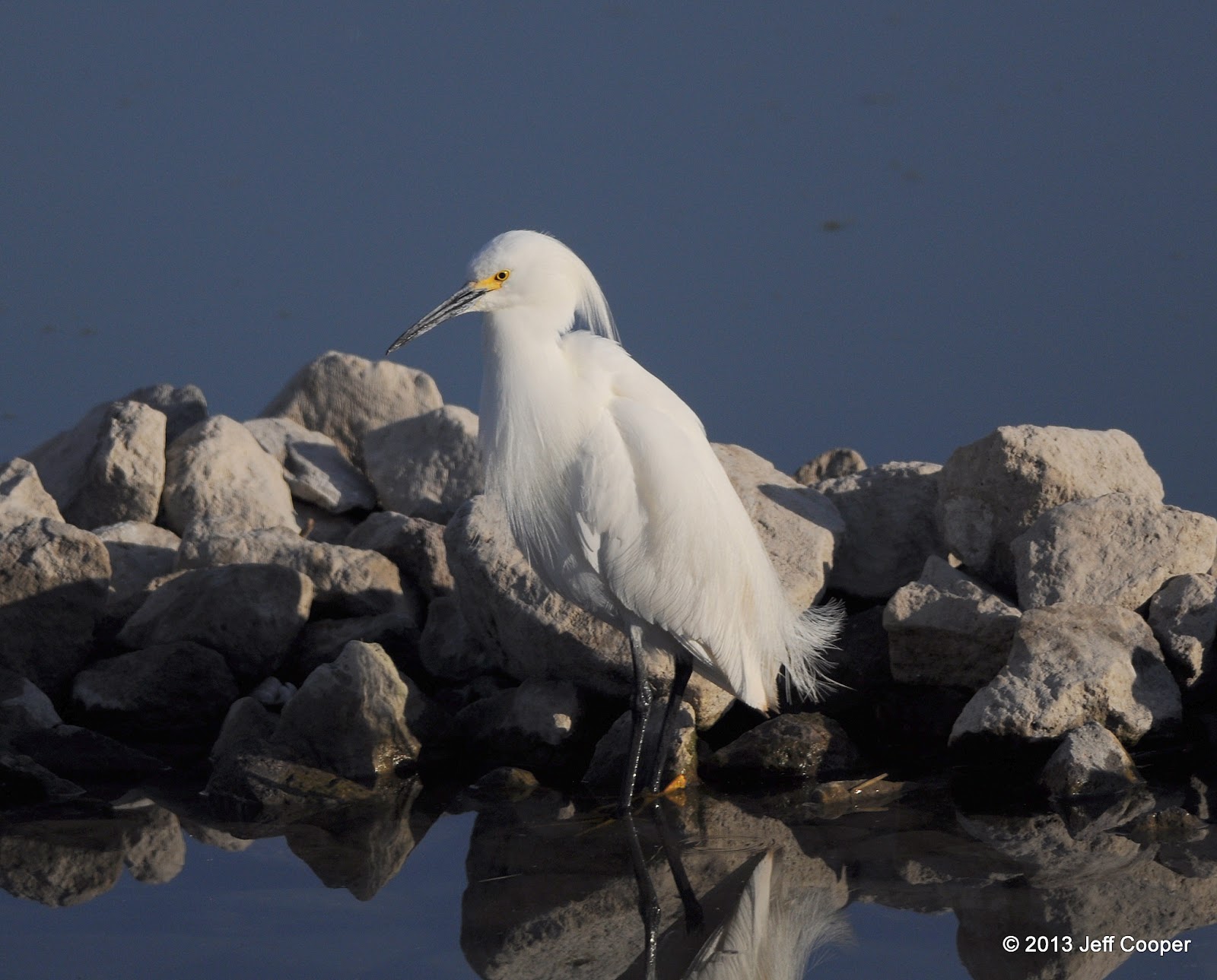 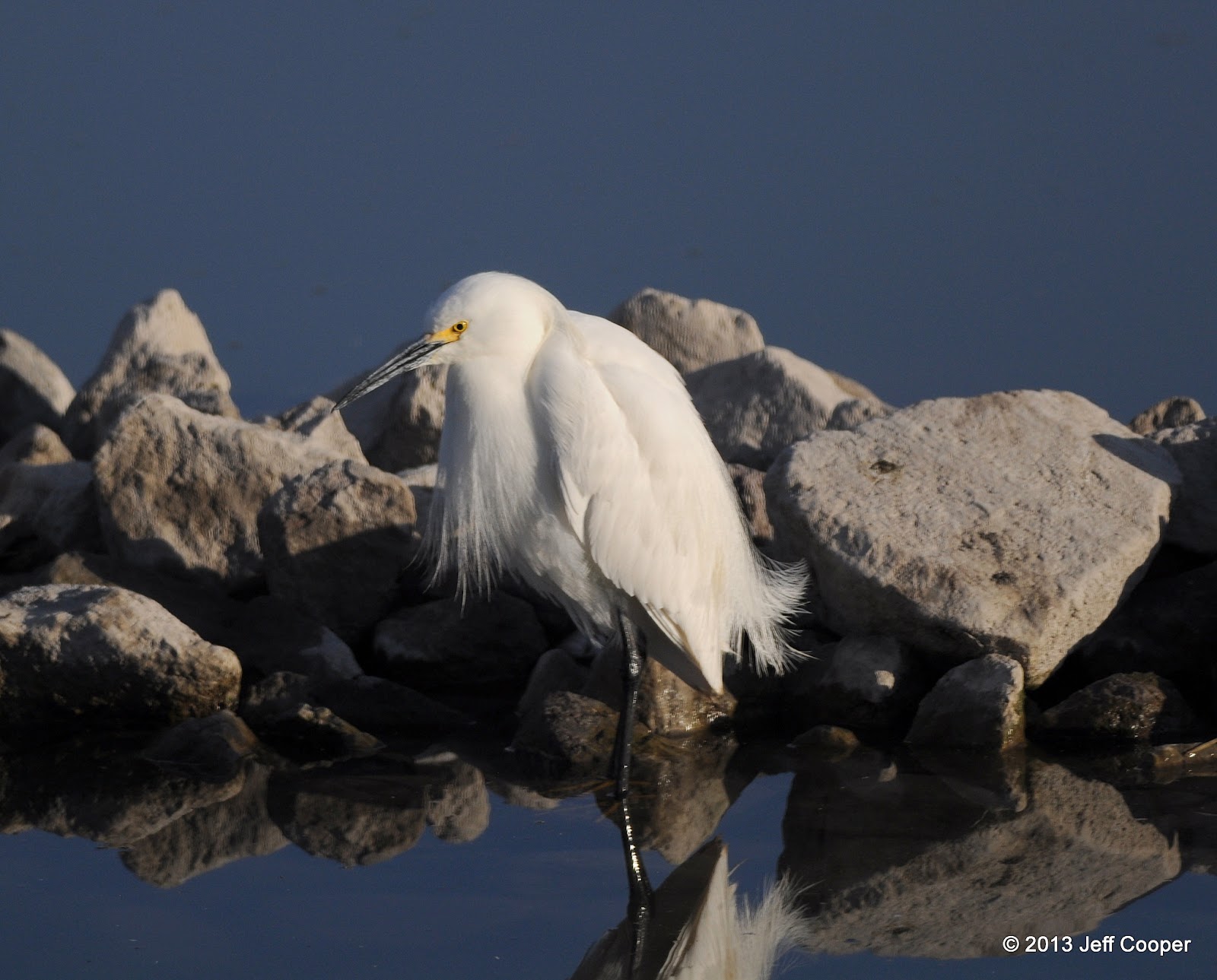 To keep this post from getting too long I'll skip the rare Semi-palmated Sandpiper, uncommon Soras, and unique Burrowing Owls observed during the Saturday morning field trip and jump to several first-of-year birds I discovered after I parted with the field trip group.

The first was a Lark Sparrow, one of my favorite sparrow because of its unique facial patterns. I came across this one as I was making my way down a dirt road at the base of Lake Mountain in Saratoga Springs. The bird was preening when I first pulled my truck next to it. I know, it is an odd moment, but this is how nature works sometimes. This is required to keep its lovely appearance. 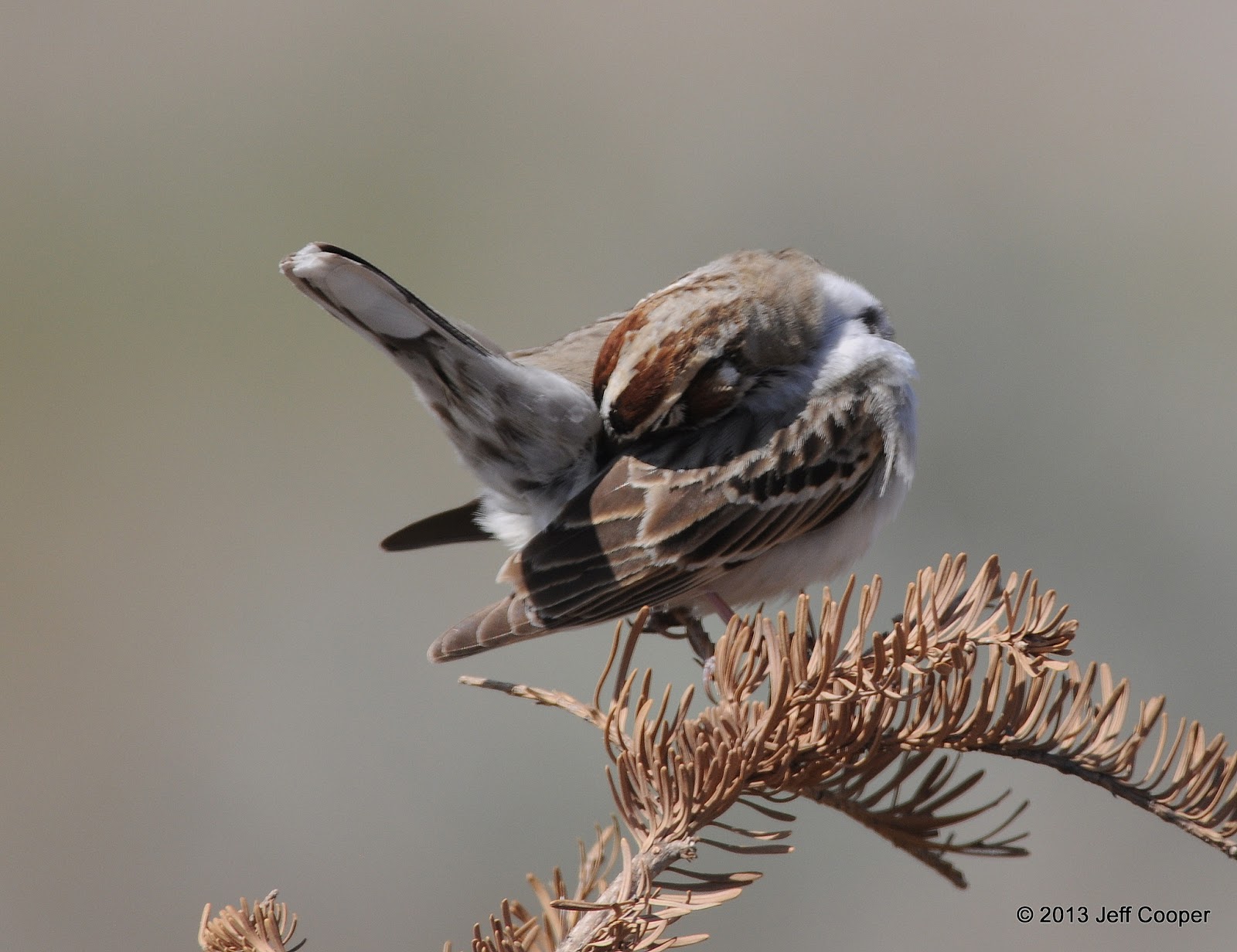 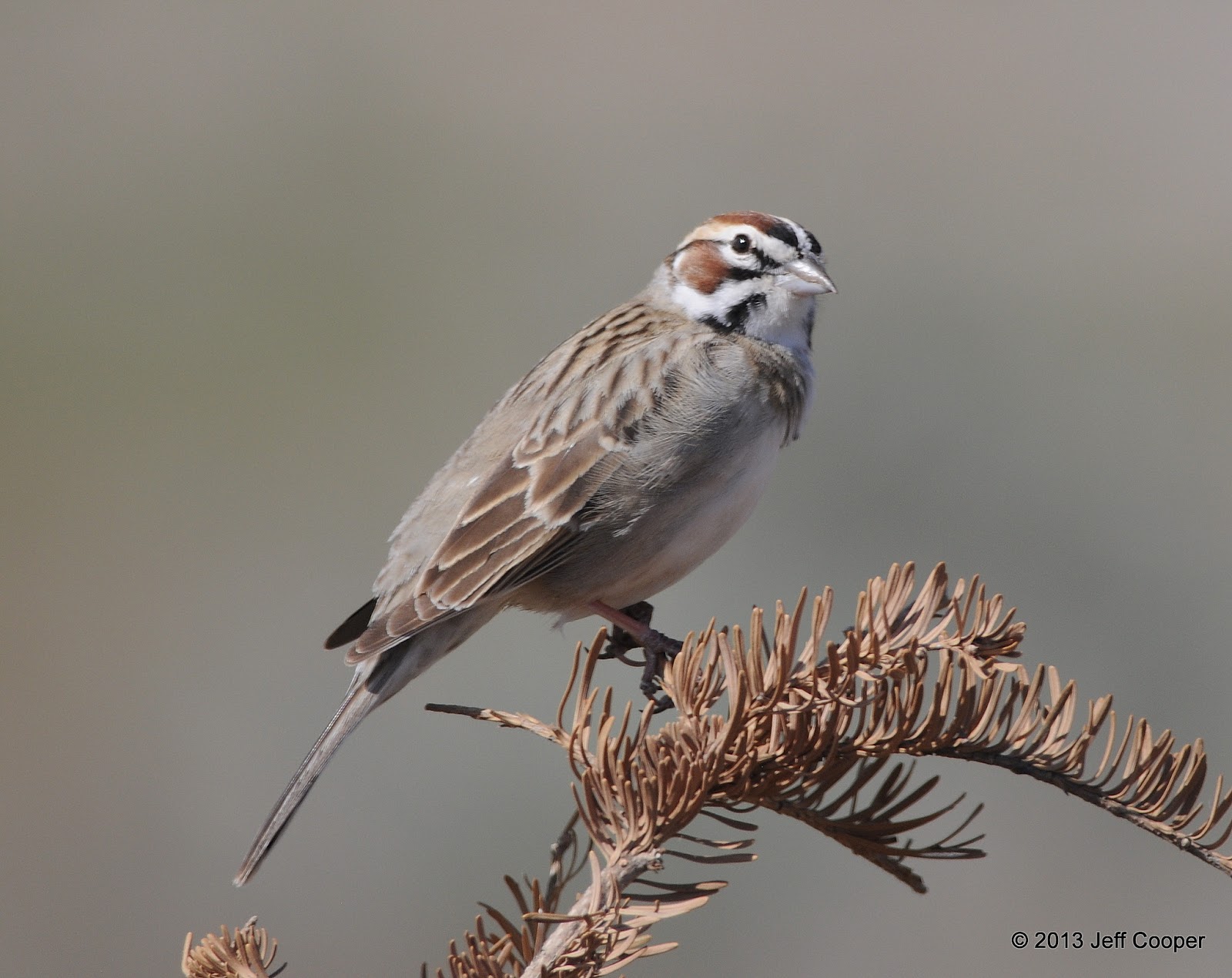 A very unexpected bird sighting Saturday was a matter of timing. I saw a large crow-like bird out of the corner of my eye as it was gliding down a hill. A Raven would have been more likely where I was so I decided to put the binoculars on the bird since it was definitely not a Raven. I got the binoculars on it just in time to see the beautiful iridescent green on the upper side as it tilted and then landed on the side of a power pole. I knew immediately it was a Lewis's Woodpecker despite it being way out of place in terms of habitat and time of year. I jumped into my truck to try to get close enough for a photo to document the sighting. It flew quickly to a lone tree even farther away and on the other side of a barbed wire fence posted with "No Trespassing". It was back-lit and essentially a black spot with a large sunny backdrop. I turned up the exposure compensation and released the shutter a few times before it flew out of sight for good. It's low quality, but by cropping and lightening the image it becomes an identifiable bird posed near a Western Meadowlark. 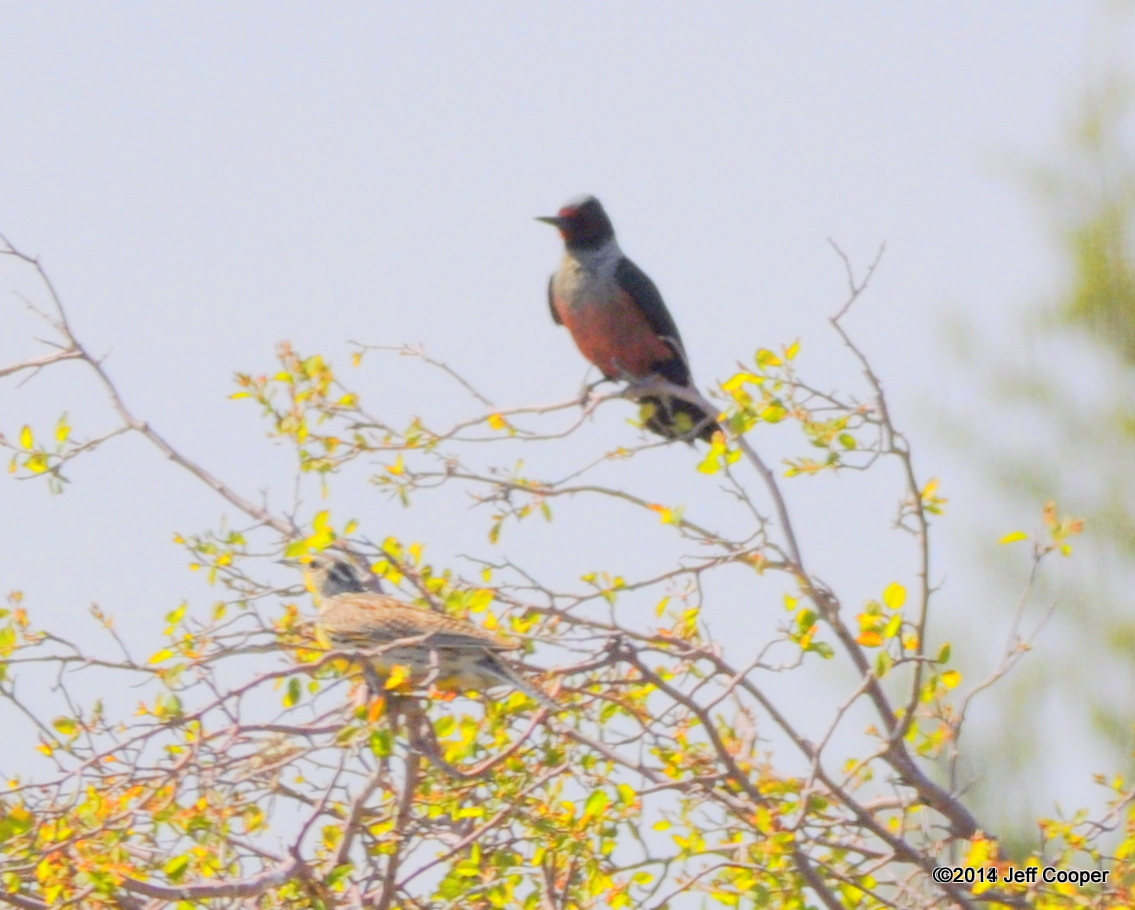 This Grasshopper Sparrow flushed from a ditch and up onto some rabbit brush as I was slowly making my way down a dirt road. 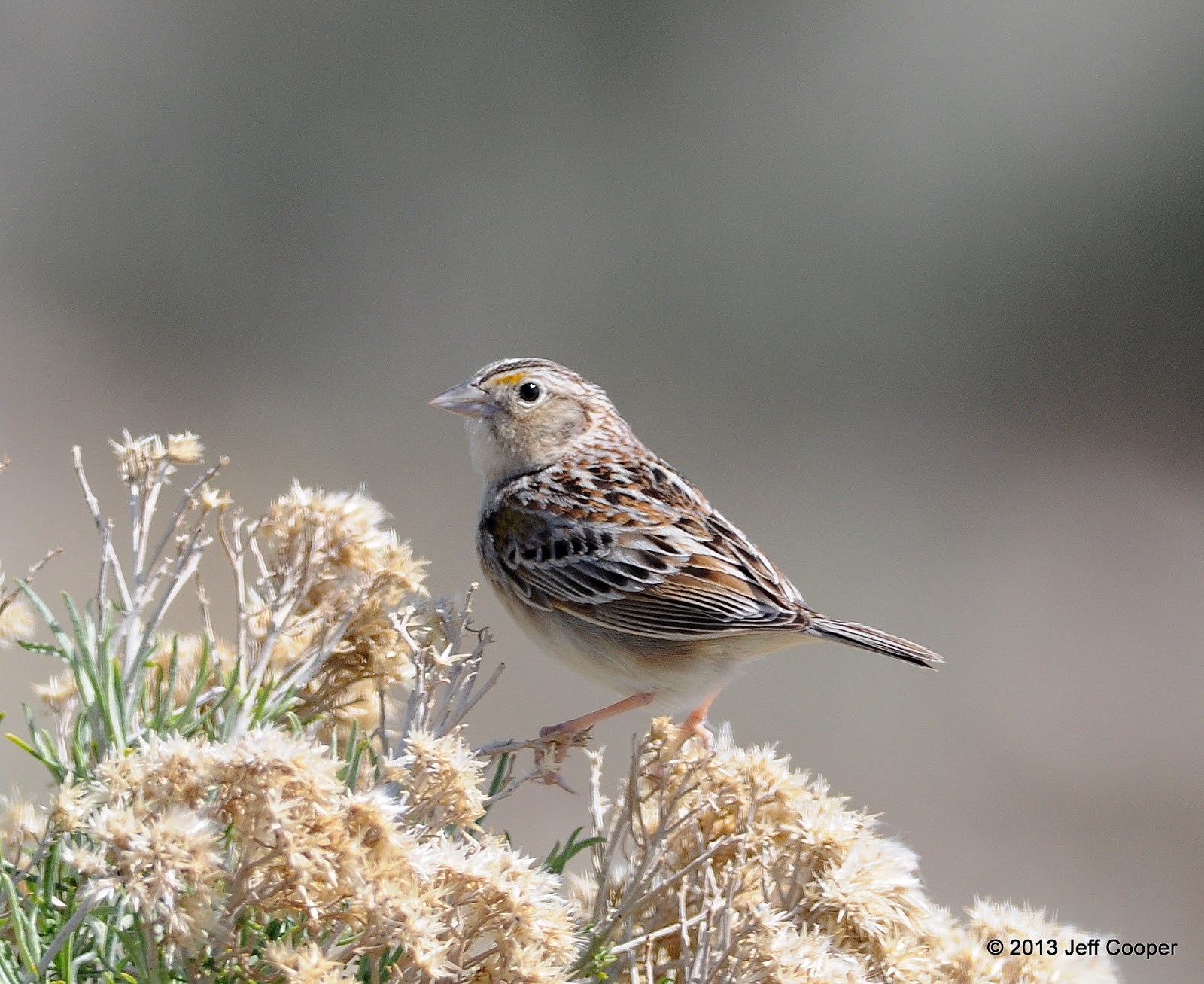 I can't wait for spring migration to deliver more uniquely colored birds to Utah County and other locales I will visit during the month of May.