I was in southern California this past weekend to participate in funeral services for my wonderful mother in law. She passed away after a struggle with Alzheimer's Disease. My wife and I had the privilege of caring for her in our Utah home for a period of time before we moved her into a nearby care center. It was hard to watch such a lovely person go from smiling when she saw my wife and me to a look of confusion on her face when we greeted her.

Shortly before the disease took away her memory my mother in law encouraged me in my efforts to photograph birds and nature. I would often go to places like Bolsa Chica Ecological Reserve and other birding hot spots during my visits to her home in Orange County, California. She would greet me from her living room couch when I walked through her front door after my early morning excursions and would always ask if she could see the images I'd captured.

I didn't expect to spend time birding during last weekend's trip to Orange County, but we had some down time the day before the funeral. I was sitting in my mother in law's home when I decided to play around with the BirdsEye app I had recently installed on my Android phone. The app is currently in its beta testing phase so it is not available to the public. I was asked to be a beta tester for the app since I was willing to pay for it prior to its release. I wanted to test the "browse by location" feature to see what birds were being seen in the local area so I opened the app and checked the map to see what popular birding locations were shown nearby. I selected El Dorado Park in Long Beach and the app let me know there were some birds seen there recently that were on my target list. One of those target species was Red-shouldered Hawk. I'd come close to getting a decent look at Red-shouldered Hawks in recent months, but I wanted to get some better looks. With the approval of my wife I made the ten minute drive to the park to search for a Red-shouldered Hawk. I took one of my married sons with me as well. It didn't take long before we saw our first hawk. It was a beautifully colored adult perched on a snag. 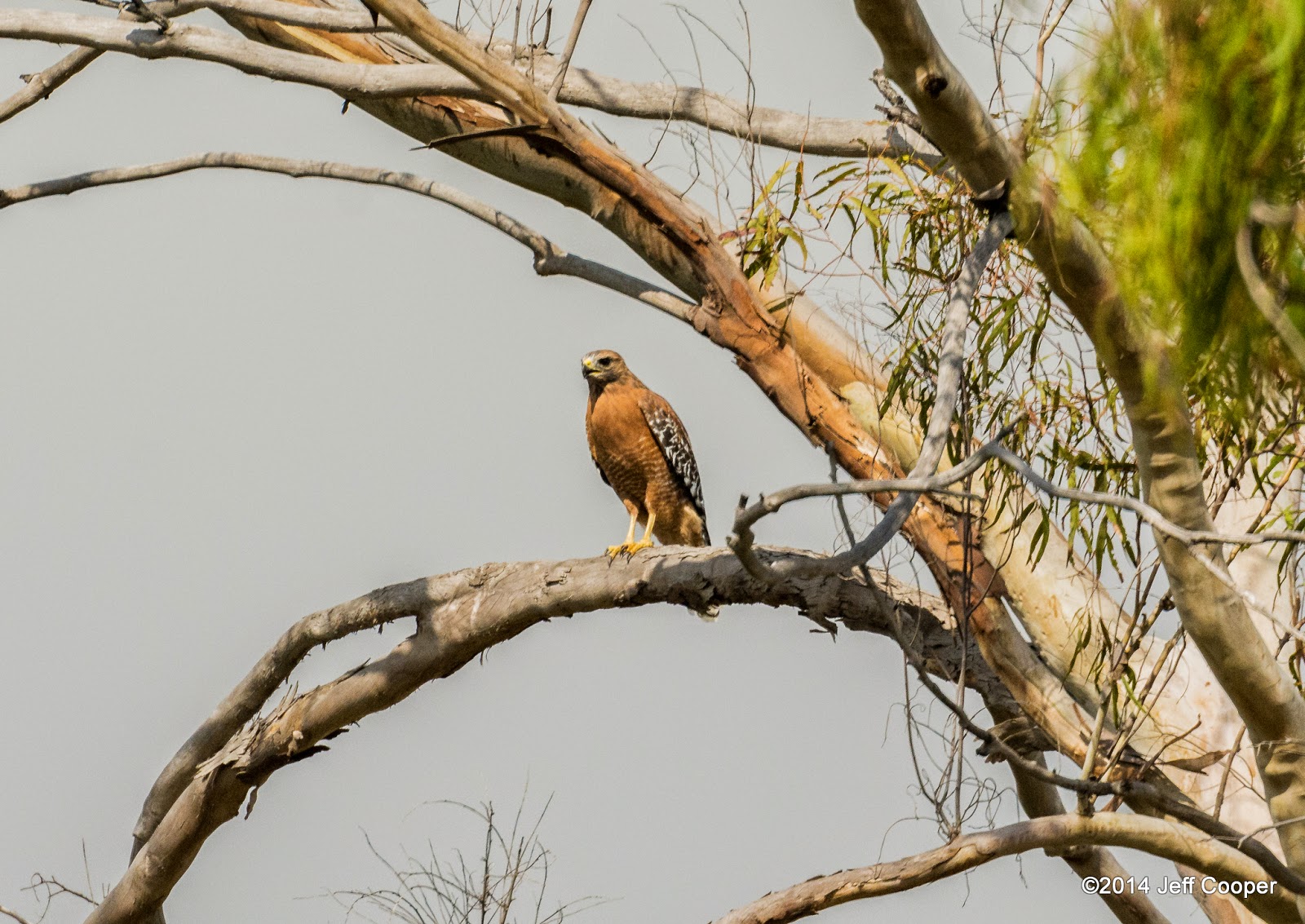 We had a good look from inside our vehicle. I tried to exit the vehicle for a closer look. I'd read that this species was accustomed to humans and often posed well for photos so I thought I'd test that with the current hawk. As I later came to understand from some reading it is the Florida race of this species that is more camera friendly. The California race is not so indifferent to humans, even in a busy park, so it decided to fly just as I was getting ready to capture some images. 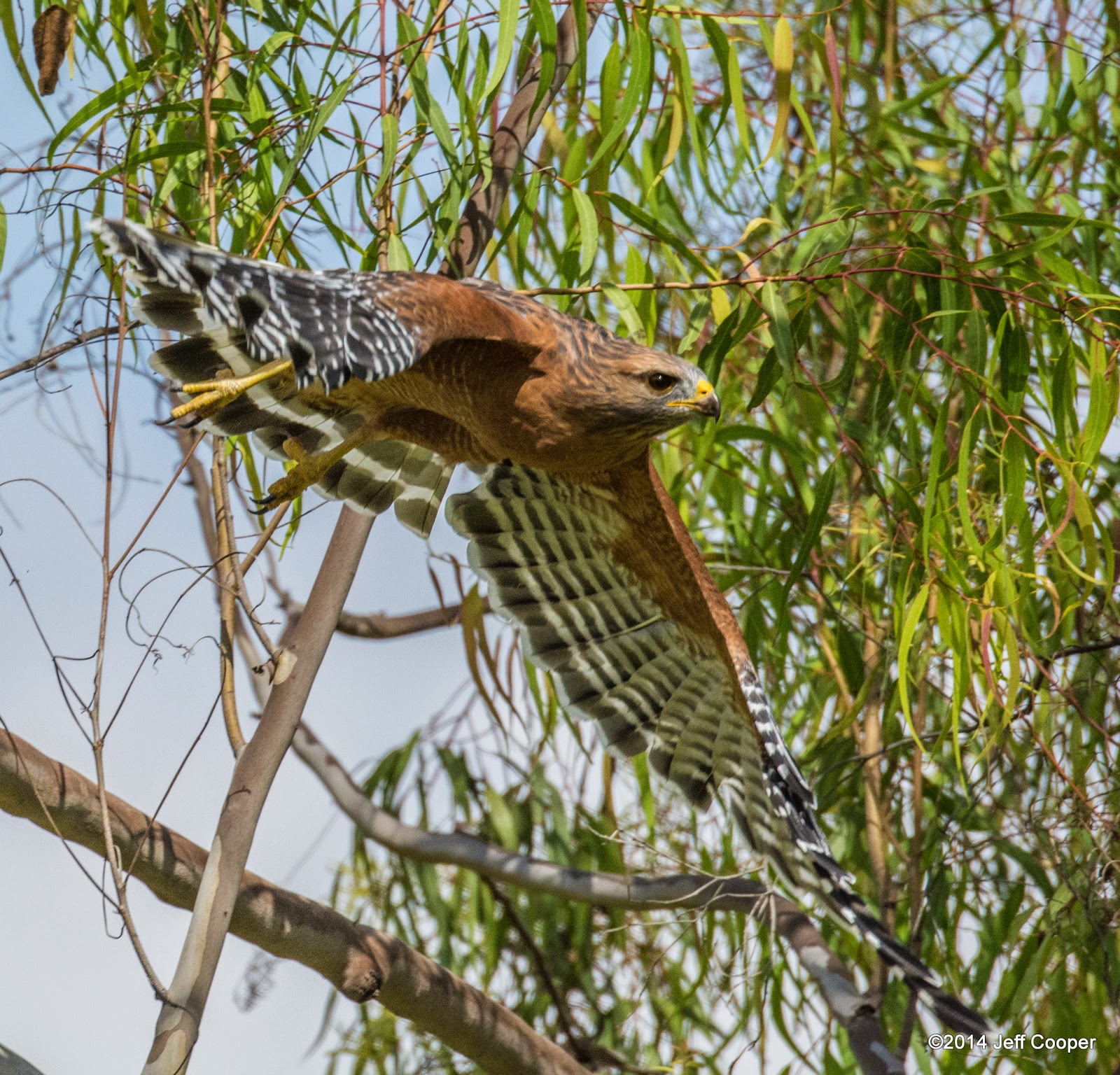 I gave chase on foot as the hawk flew like an accipiter with a few snappy wing beats followed by a glide below the lower branches of some trees. When I approached where I thought it had landed I turned to speak to my son. I assumed he was running behind me, but he was far behind and later explained that he enjoyed a good laugh watching "Pops" chase after a hawk with camera in tow.

I moved beneath some trees and discovered a juvenile Red-shouldered Hawk instead of the adult I was seeking. It was perched in a spot that was obscured by branches so I positioned myself as best I could to capture a couple of images. 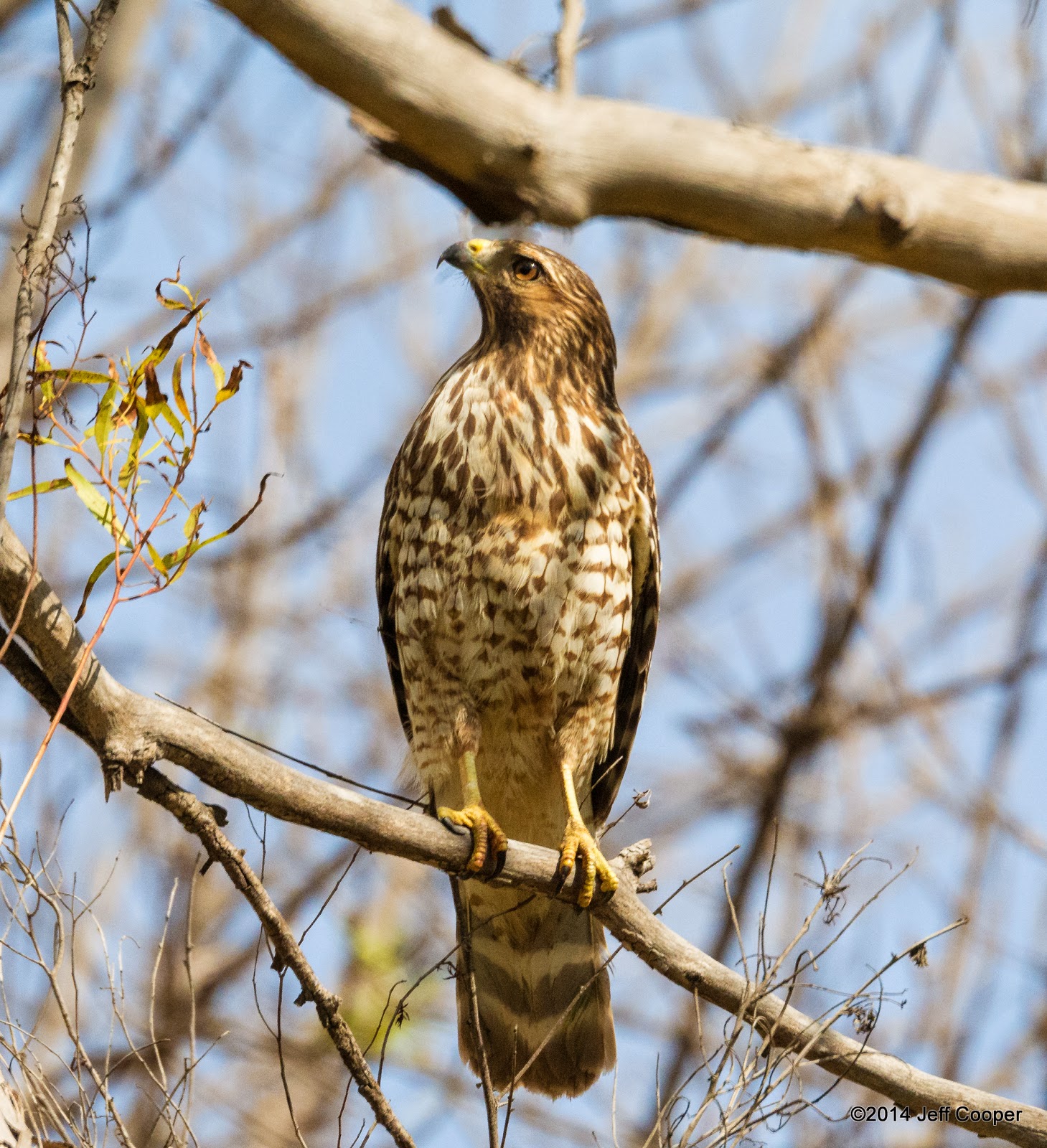 I headed back toward my son and realized that the juvenile had flown to a perch between us. I was excited to see the image below through the view finder of my camera as the shutter released. However, I was bummed when I took a look at the image and noticed a branch went right between me and the bird's eye. Oh well...such is life when you try to photograph things that spend a great deal of time around obstructive branches. This is when I should play around a little with Photoshop. 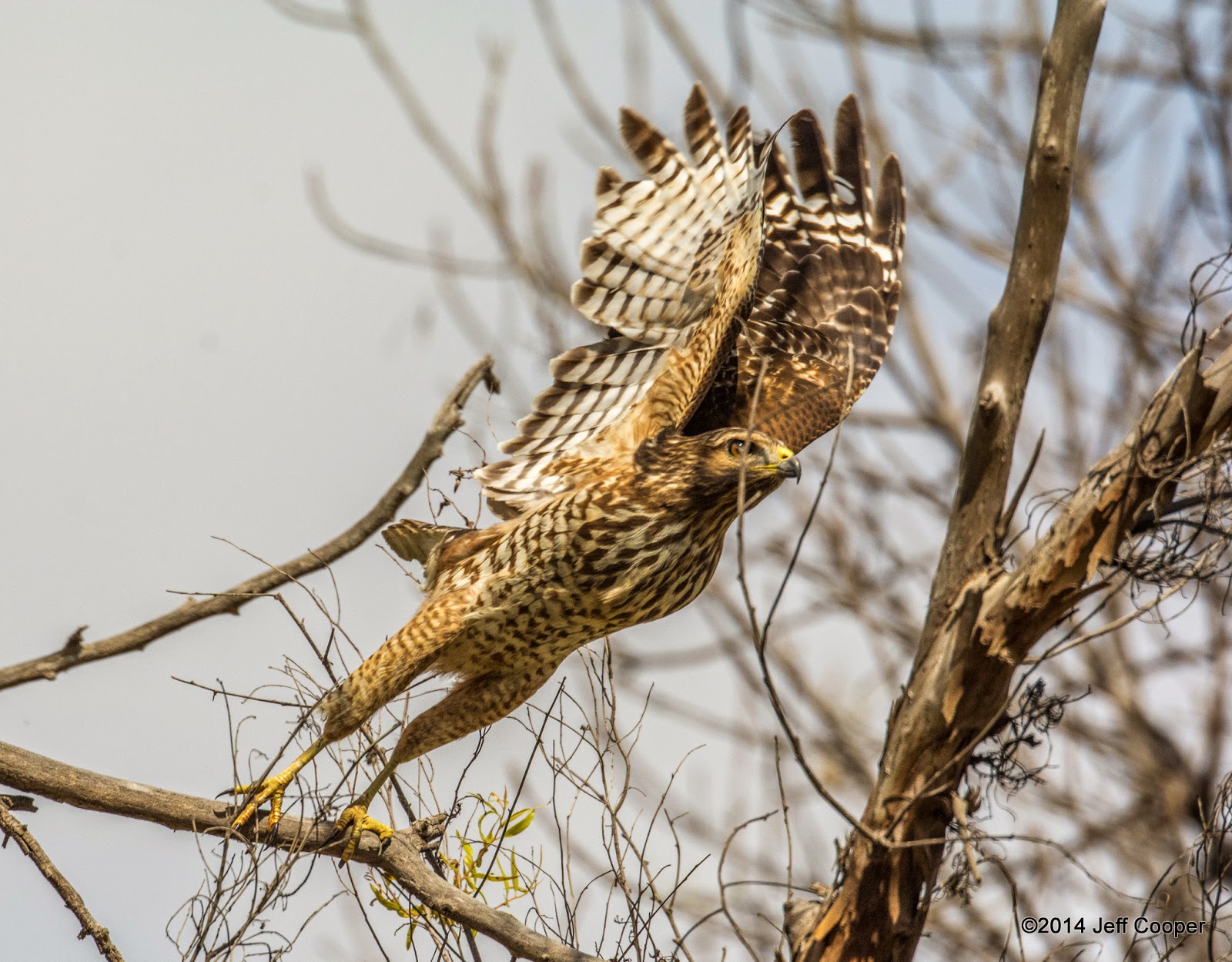 After reviewing my first set of images and realizing I got close but not quite what I wanted I decided to make one more trip to the park before making the drive back to Utah. I went early the day we were leaving. The sun was just rising when I encountered an adult perched in a Sycamore tree so it was casting a light orange hue on an already rusty-colored bird. 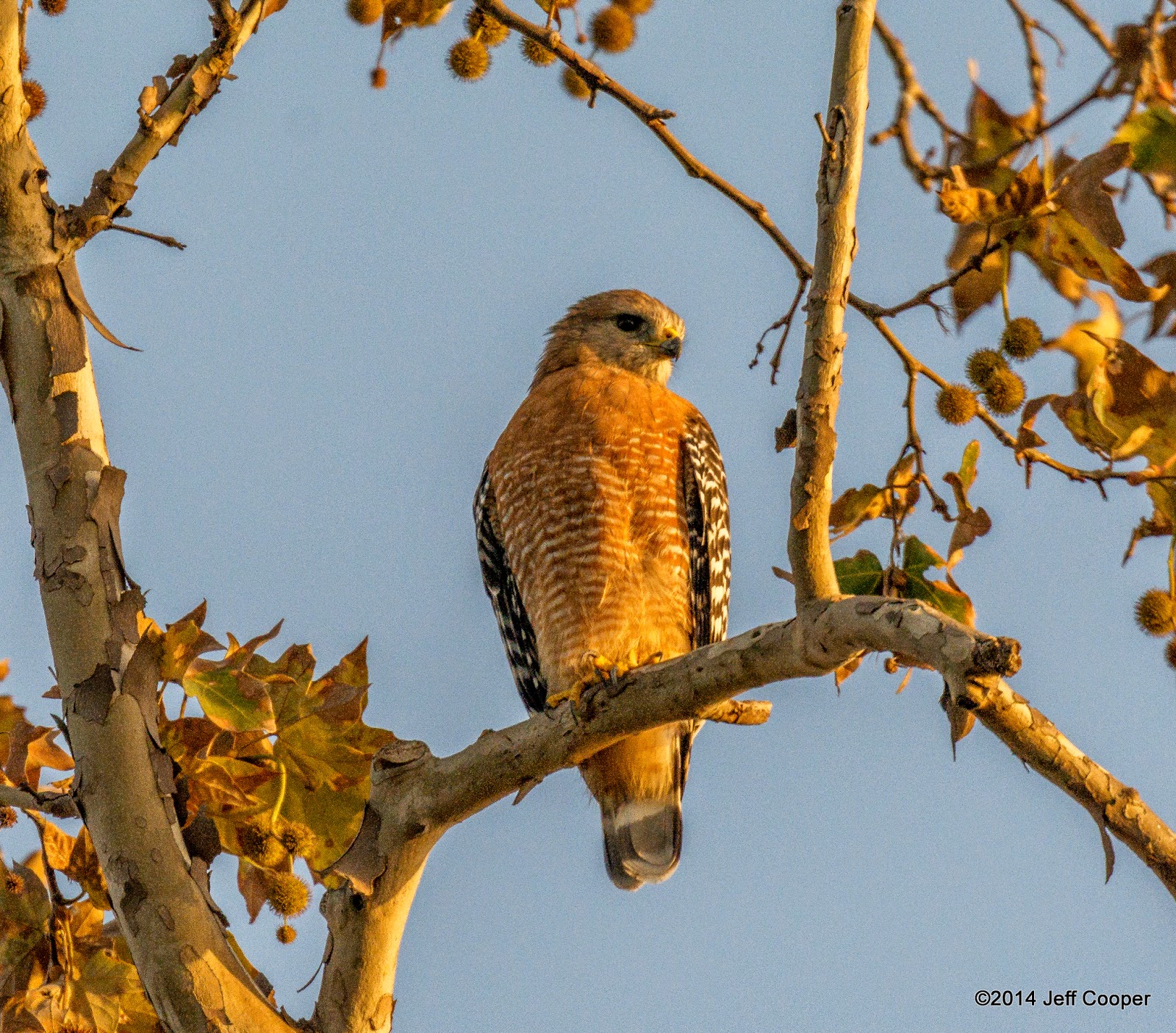 A moment later a second adult flew in to join the first.They were high above me and facing away from me so I was unable to get a good perspective. 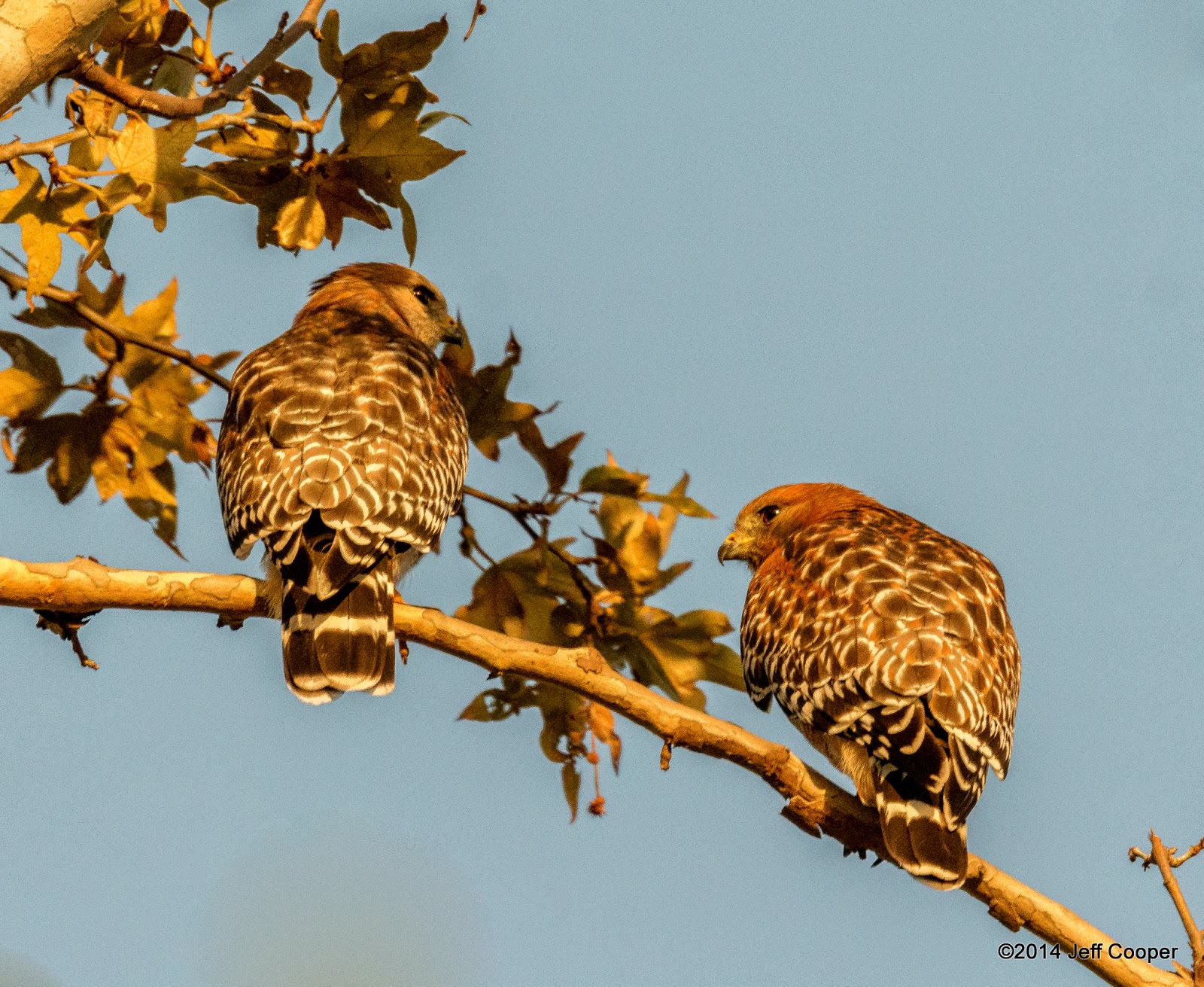 Again, I was excited to see the image below in my camera's view finder as one of the hawks took flight. Upon reviewing the image on the display I realized I was jinxed again. One wing got clipped. I generally want to see the eyes of the birds I photograph, but this one at least allows an upper and lower side view of adult Red-shouldered Hawks. 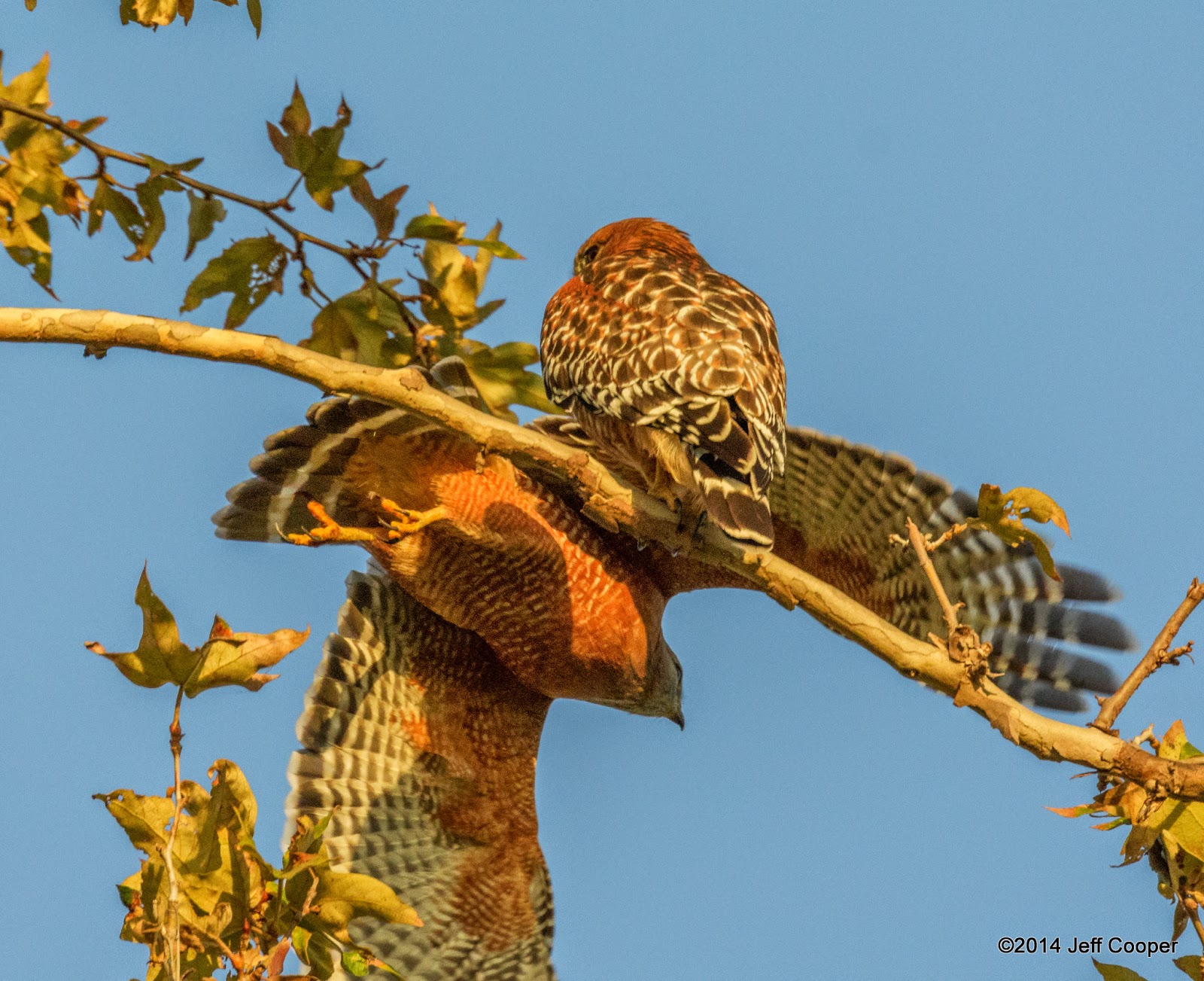 Well the beta version of BirdsEye for Android did its job in pointing me to a bird I'd wanted to see and photograph for quite some time. It was a thrill to get good looks at this species. Seeing multiple adults and at least one juvenile was exciting for a raptor lover. New birds are always fun to encounter and observe. I didn't do as well as I'd hoped when it came to capturing images that were satisfying, but I'll always remember the thrill of finding these birds in a park so close to a place I'd visited many times over many years. I can't believe I didn't discover their presence much earlier. BirdsEye for Android is going to be a great new birding tool.
Posted by Jeff Cooper at 10:27 PM No comments: