What Can You Say About This Scaup?

I'm confused by the plumage of a Greater Scaup I observed and photographed earlier this week on the Jordan River in Sandy, Utah. My first impression was that I was observing a female Greater Scaup when I saw the brown head with a contrasting white patch at the base of the bill and forehead. We don't often see Greaters in my part of Utah so I often try to sift through the Lessers to find the Greaters--I'm not referring to the people of Utah :)   It's much like sorting through hoards of Canada Geese hoping to find a Cackling or Greater White-fronted Goose.

I'd love to get some feedback (leave a comment below) on the sex of this bird because it exhibits plumage characteristics of both male and female. The head looks very female, but the body is quite different from female yet not really male either. I searched my field guides and checked for images on the web and was left scratching my head. I found one comment on the web about older female's taking on male plumage. Some of my local birding experts suggested older female, brighter female, and juvenile male transitioning to adult breeding plumage.

I've included male Lesser Scaups in most of the images below for comparison. The last two images include the Greater AND a Lesser Scaup with similarly confusing plumage. That particular Lesser's head is notably darker so I wonder if we have juvenile males transitioning to their first adult breeding plumage. None of my field guides show much about 1st winter/spring males. Did I mention I was confused? The bird on the right in the last image has quite messy plumage in case you want to comment on that one.  I'm not sure if he's trying to change into our out of his breeding outfit. 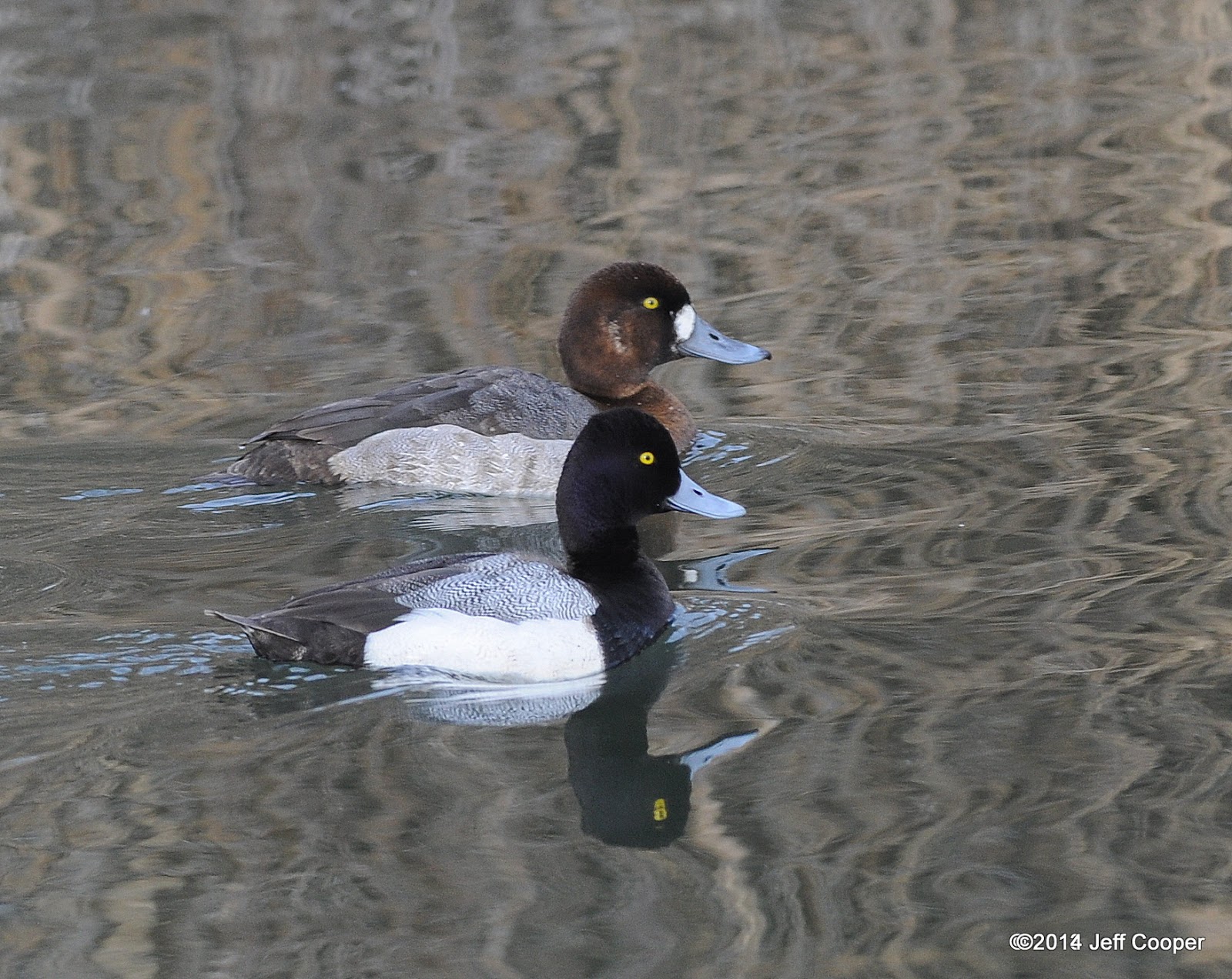 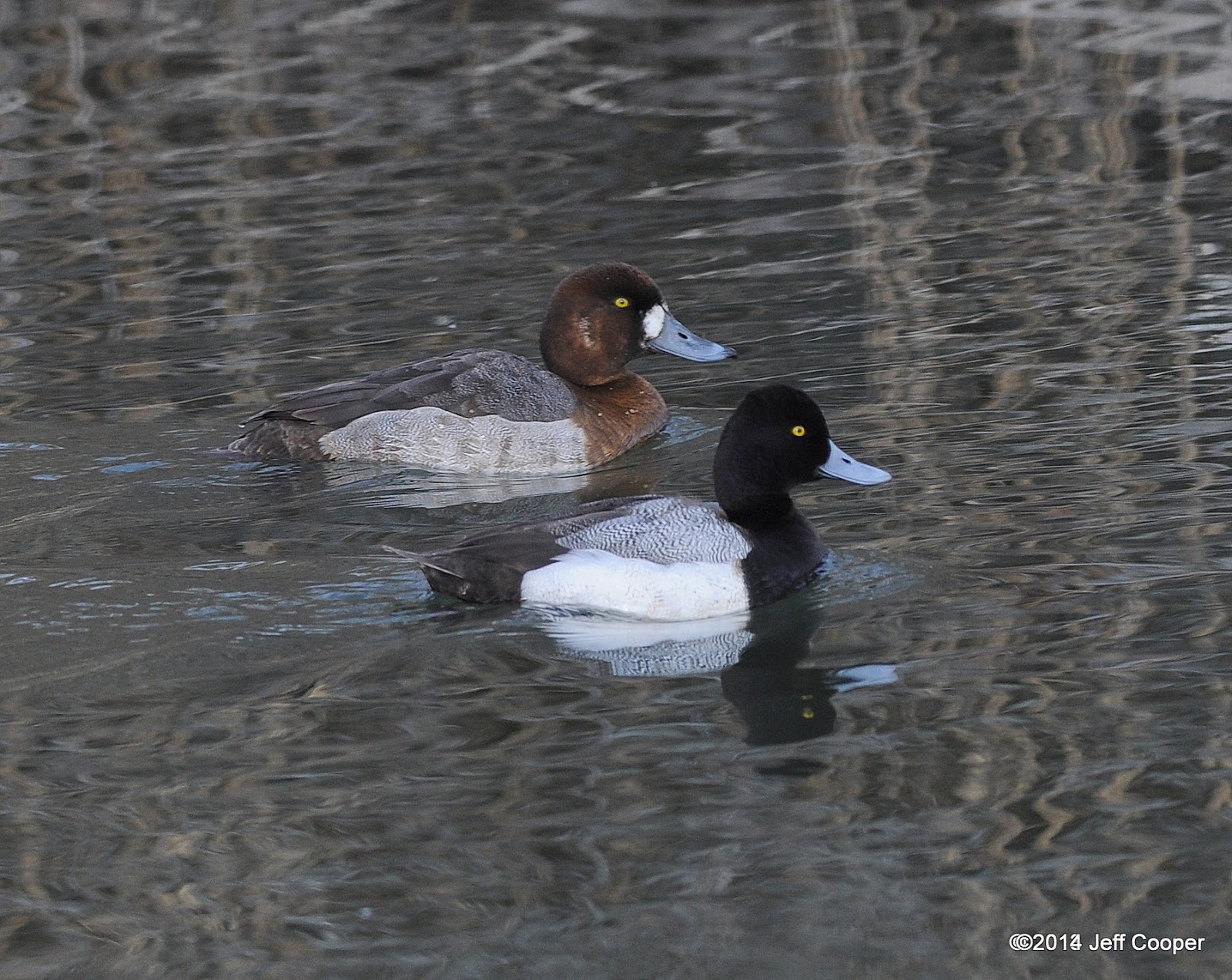 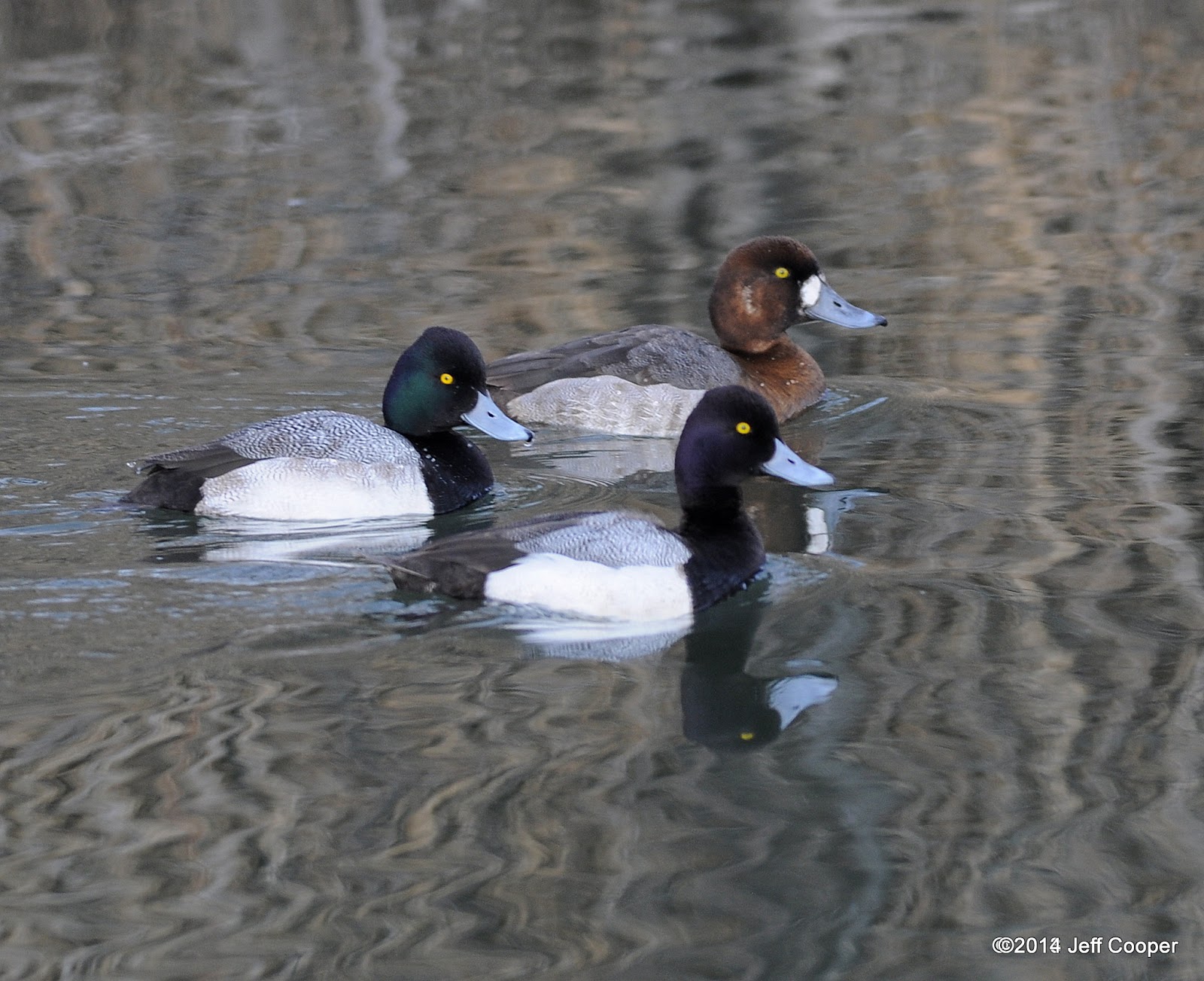 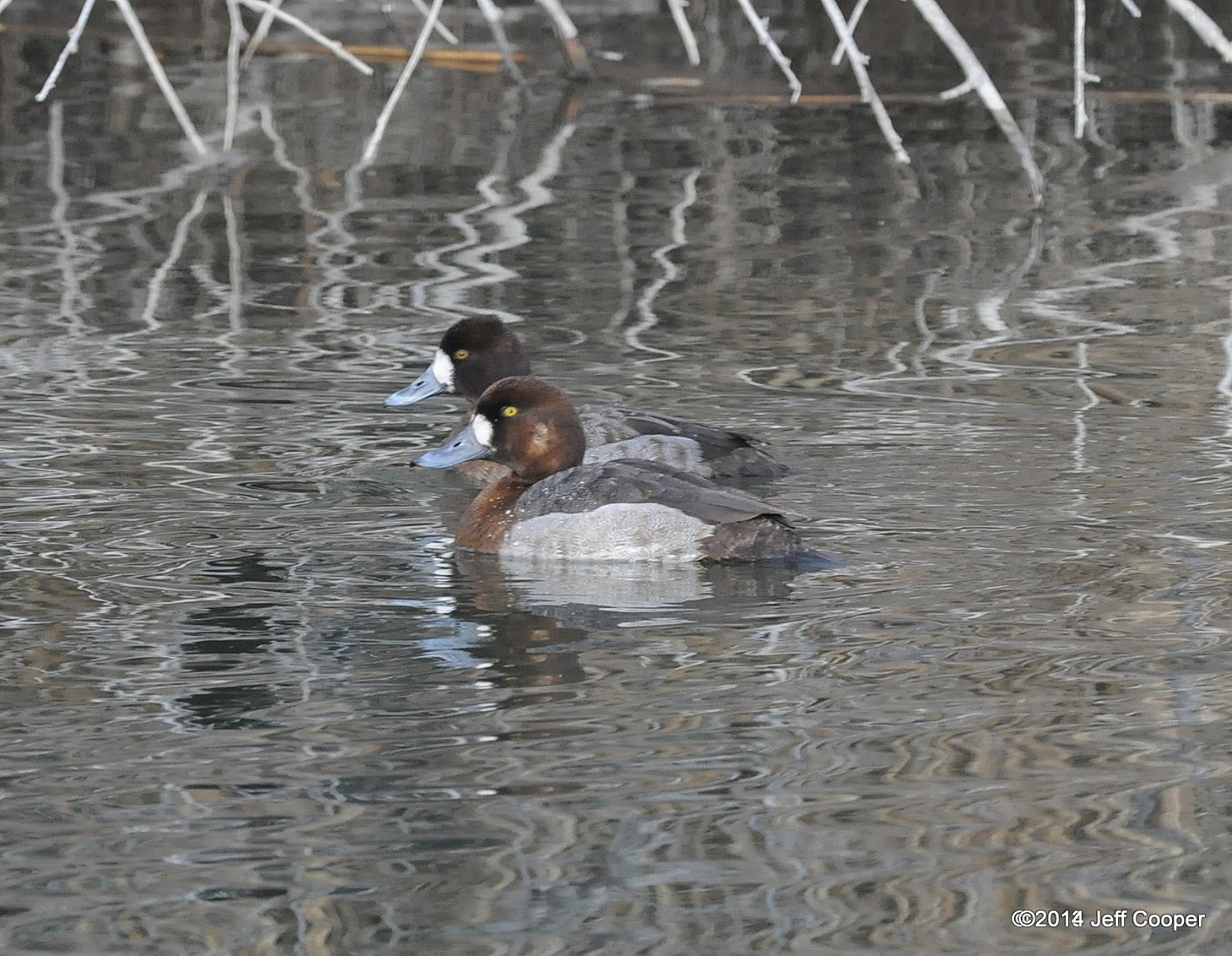 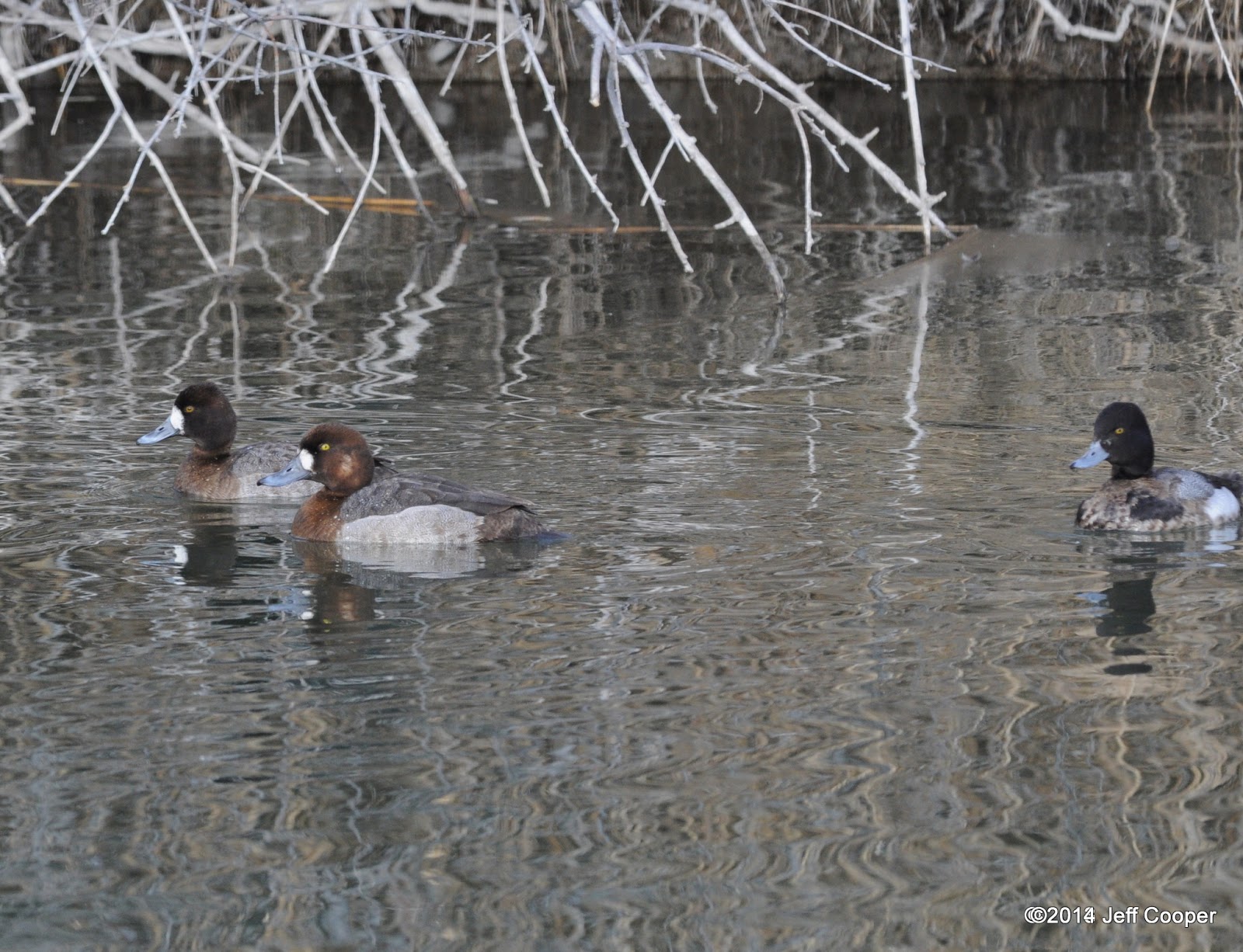 My post for today is actually appearing on the Birding is Fun! blog as my monthly contribution to that blog. It includes quite a few images of Partridges, Chukar, Quail, Grouse, Pheasants, Turkeys and more--up close and colorful.  CLICK HERE to be taken to my post for today on Birding Is Fun!, one of the world's most popular bird blogs.

Thanks for visiting. I'll be posting my next birding experience here on NeoVista Birding soon.

Posted by Jeff Cooper at 7:51 AM No comments:

Casting a Pellet AND Yard Bird Species #68: What's That All About?

I know.  It's a confusing title for a blog post, but it does allude to two birding highlights I experienced Friday.

I received a phone call from my birding and bird photography friend Eric Peterson Friday morning. He had just found a bird he knew I was trying to add to my species list for the new year--a Northern Pygmy Owl. It was perched on a power line near Aspen Grove, just above Sundance Ski Resort in the mountains above Provo Canyon in Utah County, Utah. I quickly grabbed my bag of gear and made the 30-minute drive into Provo Canyon and up the east end of Alpine Scenic Highway. Eric and the owl were right where they were when I got the call. The owl was content as it perched on the power line above the road. Eric and I took some photos and then followed the owl when it flew further up the canyon and back onto a power line.

Northern Pygmy Owls are about 6.5 inches long, are often active in daylight, and generally eat small birds and small mammals. It's one of the smallest carnivorous birds in North America. While these owls are residents to Utah and other mountainous western states and areas of the US, Canada, and Mexico, most sightings of this bird in Utah take place during the winter when their puffy little bodies are more easily seen as they perch on barren horizontal branches and wires along mountain roads. This vantage point allows them to keep watch over the open roads and spaces below them where unsuspecting birds and rodents pass and become easy prey.

While we were visiting and observing the owl we noticed that it opened its bill wide and started to heave. We knew it was getting ready to cast a pellet. For those who are not aware, birds of prey often eat their prey whole. They digest the meat and fluids of the prey and eventually regurgitate the remaining fur, feathers, bones, etc. in the form of a compact wad of leftover stuff.  We focused our lenses on the owl when it began to heave and started firing away with our digital cameras. Below is a series of images of the owl as it heaved and ejected the unwanted wad of stuff.  I missed the actual ejection with my captured images, but Eric has shared one image where the pellet was captured mid-air, just after being ejected.

Isn't this how people look just as they realize they are about to lose their lunch, blow chunks, or toss their cookies?

Hack! This appears to be quite the process. The eyes are closing, a sign of intense focus, and the posture is beginning to lean forward.

And here's the image, courtesy of Eric Peterson, capturing the the projectile and the force behind it--the process consisted of multiple heaves, eyes going closed, fulling gaping mouth.

And here is an image of the wet, blackish pellet (~1/2 inch) after Eric trudged through snow up to his thighs to retrieve it and placed it on the road. You should be able to make out some fur and a tiny bone or two. Probably the remains of a small bird and/or mouse or vole.

As Eric and I parted I thanked him for calling me to see the owl. He asked me to call him if I found anything of interest. He was hoping to photograph a particular species. That brings us to yard bird species #68 and the second part of this post's title. It also shows that favors are returned among good friends.

I had just finished visiting with someone in my home and heard the trill of Cedar Waxwings coming from the backyard. I looked through the back door and began to scan, with the naked eye, a small flock of Waxwings. I was looking specifically for a larger, grayer Waxwing with rufous under the tail and around its dark mask. I was hoping for Bohemian Waxwings to be mixed in with the flock since we've had an irruption of them in the northern parts of Utah this winter. I'm not sure if that's the result of harsh winter conditions in Canada or a good breeding season that has the birds spreading farther to the south than usual.  Just as I was about to give up on my hopes for a Bohemian, a larger Waxwing flew into the Flowering Plum Tree near my back patio. Bingo! A Bohemian Waxwing! The bird Eric said he was hoping to photograph earlier in the day as we were observing the owl. I ran through the house locating my phone for Eric and my camera to document yard bird species #68 (according to my eBird records).  Eric arrived shortly after my call and we photographed the birds as we wandered around my backyard and the yards of two neighbors (permission granted of course--I called them prior to Eric's arrival).

You can see a comparison of the colors and sizes of Cedar and Bohemian Waxwings from one of my previous post by clicking here.  The images below were captured Friday afternoon.


You can see a comparison of Cedar Waxwings and Bohemian Waxwings from a previous post by clicking here.

I've happened upon some choice birding experiences recently as a result of deciding to veer slightly from my typical driving routes. Friday, for example, I was almost home when I decided to take a short half-mile detour that took me between our local high school and one of my favorite little quick-fix birding parks. I was delighted and disappointed at the same time when I spotted a Taiga Merlin perched in a lone tree right beside the road--delighted to be so close to a Merlin, disappointed that I left my camera at home earlier that day after wondering if I should take it.

Merlin's are in the falcon family of raptors and come down to Utah from the far reaches of Canada during our winter months.  It may not sound very nice, but Merlin's are essentially bird-eating birds with amazing speed and agility in flight. I observed Friday's bird for a few minutes without the aid of my usual optical tools and then took a picture using my phone camera. The resulting image did not do justice to what I was watching so I made the decision to drive home, grab my camera, and return to the scene with fingers crossed that it would still be present.  About seven minutes later I had my camera in tow and was heading back toward the school.  I began to cast my bird photography spell on the subject.  "Be there! Be there! Be there!" And...it was there!

I spent about 20 minutes photographing the Merlin while it stretched, shrugged, rotated, contorted, reached, plucked, and fanned various parts of its compact yet powerful little body. The Merlin looked down at me in a curious manner several times throughout it preening session. What a fascinating experience!

The talons that are capable of taking birds nearly twice its size in a mid-air attack and the bill that is capable of shredding its prey, are used in a more delicate manner as they gently separate and condition very supple feathers.  I watched as it balanced on one leg while using the other to complete a tail fan and a wing stretch. Some movements and poses reminded me of more human moments. I'll forgo including the funny human thoughts that crossed my mind and let you approach these images with your own perspective. Feel free to share some of your human impressions of the bird's actions in the comments at the bottom of this post.

One leg for standing and one leg to aid in the stretching process.

Sorry, but I have to interject something here. That bill can shred meat. Look how gently it preens that tail feather. Click here if you want to read how various birds preen and why.

Sorry to interject again, but there is something really fascinating in how that fierce bill and deadly talon come together in a very gentle and calculated way.