Celebrating Spring in the West Desert

I celebrated the arrival of spring by making a visit to the sagebrush-desert habitat of Utah and Tooele (pronounced too-will-uh) Counties Saturday morning. My wife has owned my time on the weekends for several weeks in a row as we've engaged in spring cleaning to prepare for some family visitors. All that spring cleaning gave me spring fever so going to the desert seemed like the perfect antidote yesterday.

I spent the first part of the morning with my friend Eric in Tooele County. We found a Prairie Falcon, a late Rough-legged Hawk along with a few Bald Eagles that should be on their way back to Alaska and Northwest Canada, and some of the first Sandhill Cranes of the season. The Sage Thrashers have returned from the southern climes and the Meadowlarks were singing up a storm in hopes of attracting a mate and perpetuating a new generation.

I love the soft spring colors in the background of this image of a Sage Thrasher. The blue is from a clear sky and the lavender is what remains in the image of distant, out-of-focus mountains under morning light. I guess that's evidence of the "purple mountain majesties" we sing of in America the Beautiful. Sage Thrashers spend a great deal of time on the ground in Sagebrush habitat so they don't often show themselves well for photographs, but this one was perched up nicely along the roadside as Eric and I pulled up in his van (aka our mobile blind). 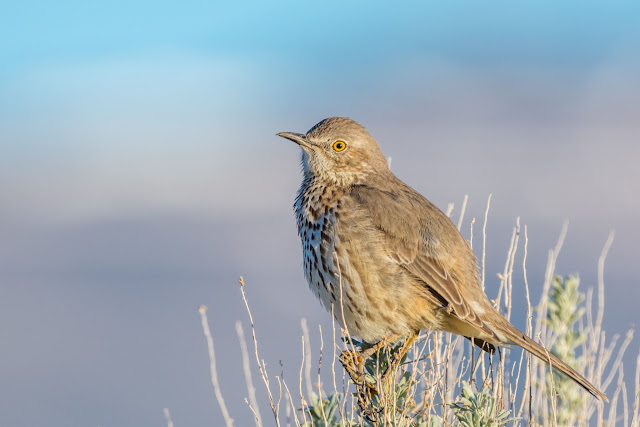 After enjoying the wildlife and scenery of Tooele County for an hour or so we drove back to where we had met earlier so I could retrieve my truck. We visited a small stream near the cozy town of Fairfield to see if Wilson's Snipes might be there. A pair of Canada Geese was seen without effort, but it took a little fine-tooth combing along the grassy edges of the stream to find a handful of Wilson's Snipes doing what they do, wading and drilling for food with their long bills. 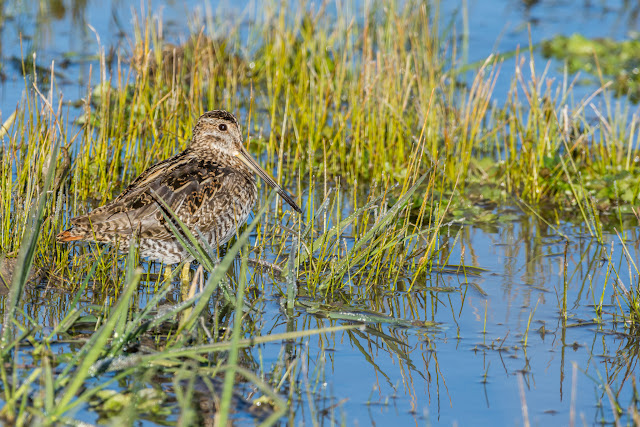 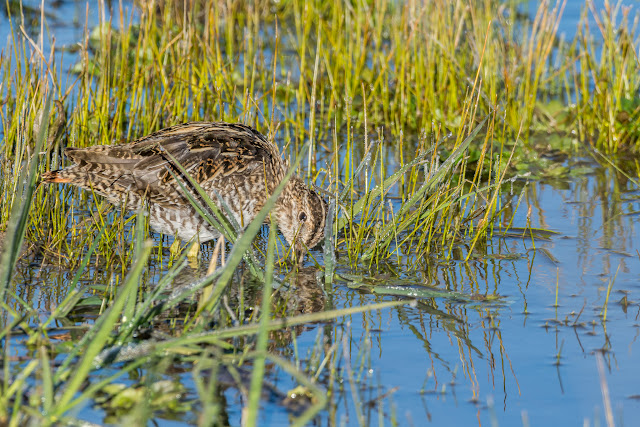 After photographing the elusive snipes I drove through a sea of sagebrush toward Soldier Pass on the south end of Lake Mountain in Utah County. I wanted to see which spring visitors had arrived from their vacation homes in more southern places. I stopped to observe two separate Golden Eagles along the way. Ravens, Horned Larks, Jack Rabbits, and Cotton-tailed Rabbits were in abundance. The Golden Eagles love the rabbit food the sagebrush habitat provides.

My first target bird at Soldier Pass was Sagebrush Sparrow. They breed in the area during the spring and summer months and seem to be among the "early birds" so to speak. I'm pretty sure I see some of the same individuals each spring so I went to the usual place and...sure enough they were right where I'd hoped they would be. First there was one perched up on sagebrush. 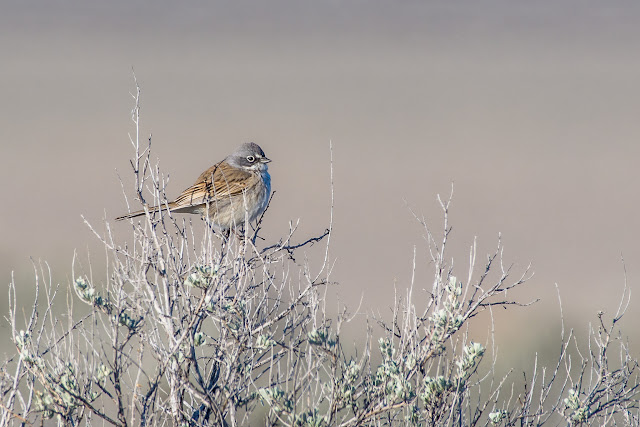 And then there were two! I suspect this is a breeding pair, but I'm not sure you can distinguish between male and female by plumage alone.

After confirming the presence of the Sagebrush Sparrows I crossed my fingers and went looking for Black-throated Sparrows. I think it is still a little early for them so I wasn't surprised when I didn't find any during the short time I spent at Soldier Pass.

I checked on the campsite my sons and I used a couple of times over the winter and was hugely disappointed by the damage people had done to the nice fireplace we had built for others to enjoy. The rock wall had been demolished. The campsite we had cleaned over the winter was destroyed just as quickly as the sun could melt the winter snow. Beer cans, shotgun shells, food cans, and pieces of assorted junk were everywhere. Someone even destroyed a juniper tree to see if it would burn. I thought about taking a photo or video and chose against doing so in order to make the few moments I had left a positive experience with nature.

As I stood in the desecrated campsite I heard the familiar song of a Juniper Titmouse, another desert specialty I enjoy seeing at Soldier Pass. I captured a series of images of multiple titmice. 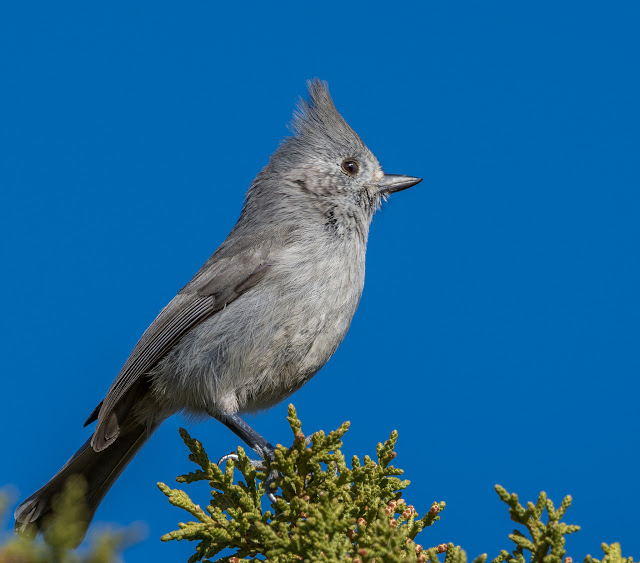 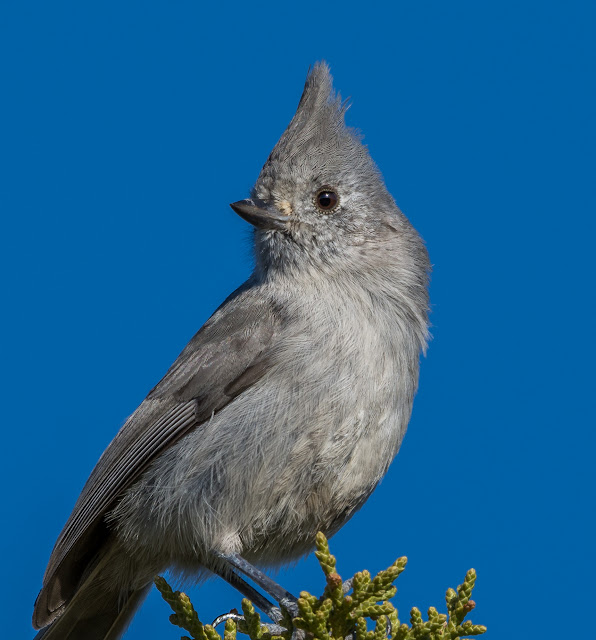 This is a heavily cropped image to show some of the detail that goes into making the typical head of a Juniper Titmouse. 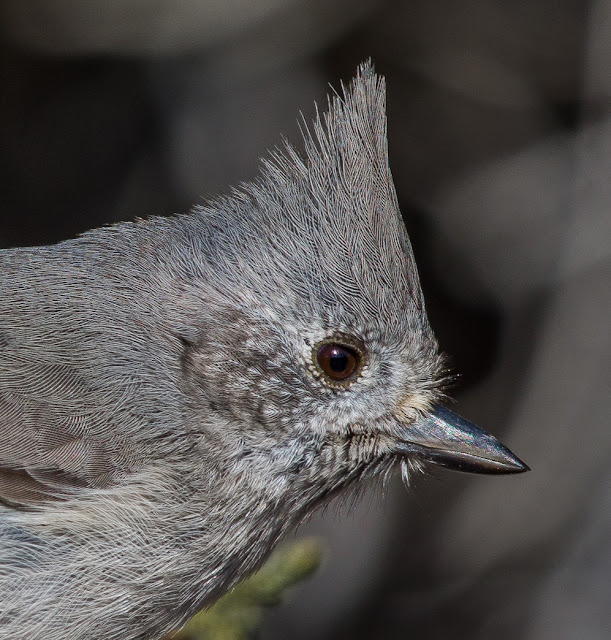 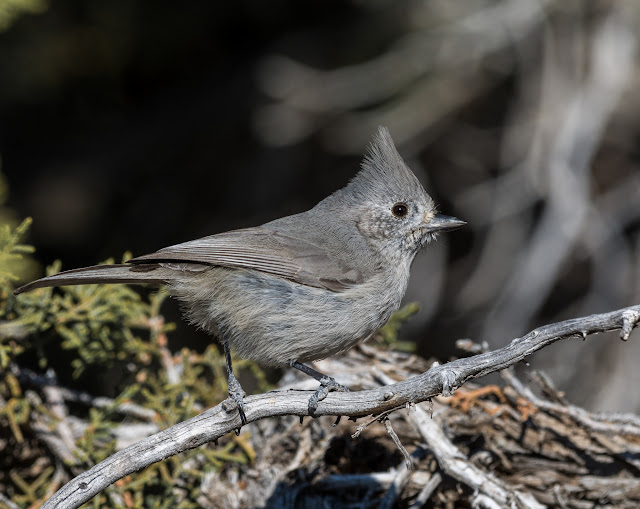 I'm always amazed at the diversity of bird species. Many have well defined crests. I guess for a plain gray bird a pointed head can make for a mark of distinction. 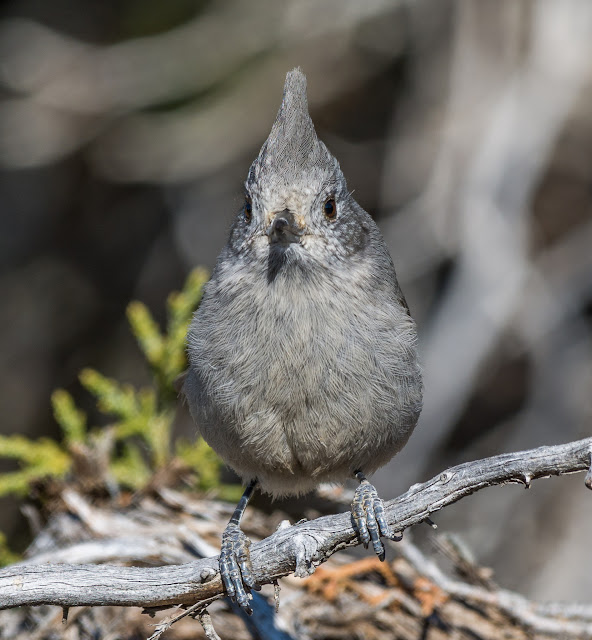 The songs and chatter of titmice was interrupted by another unique yet familiar sound, the laughing calls of a flying flock of Pinyon Jays. These nomadic birds are not often seen due to their roaming nature. Soldier Pass includes both sagebrush and pinyon-juniper habitat so it was a nice coincidence that I experienced Sagebrush Sparrows, followed by Juniper Titmice, and then Pinyon Jays. A small flock of about thirty jays flew over my head and landed just up the road from me. The lighting was nice and the sun was behind my back as I captured images of one Pinyon Jay while I could. 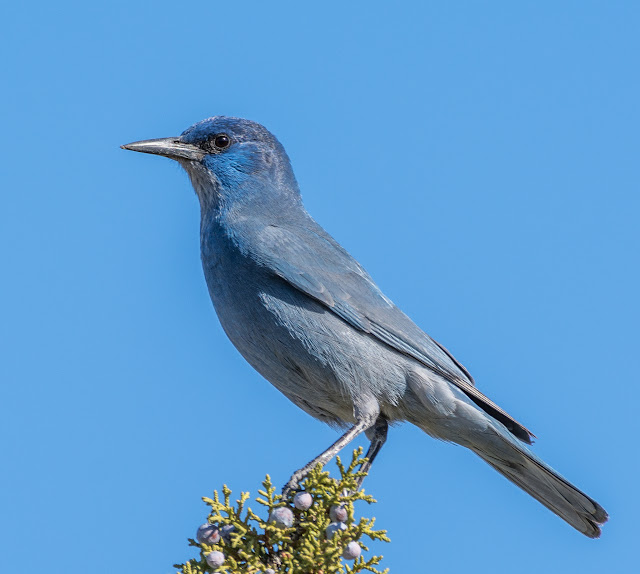 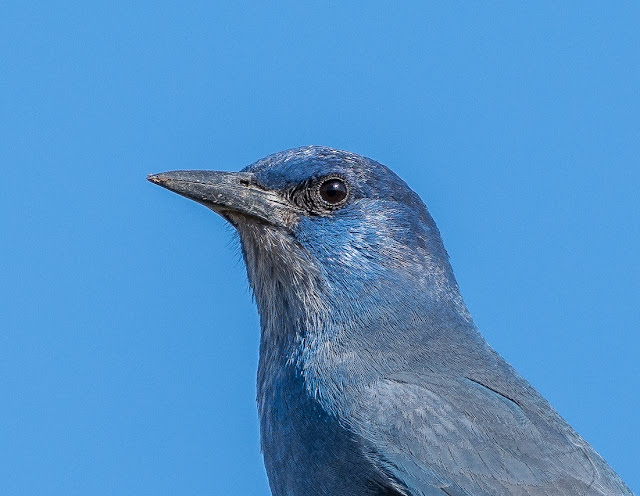 Apparently blue and gray were the official team colors for the desert birds Saturday. After the Pinyon Jays showed up every bird thereafter was some mix or shade of blue and gray, including the Loggerhead Shrikes I didn't photograph. Mountain Bluebirds and Western Scrub-Jays graced me with their presence. 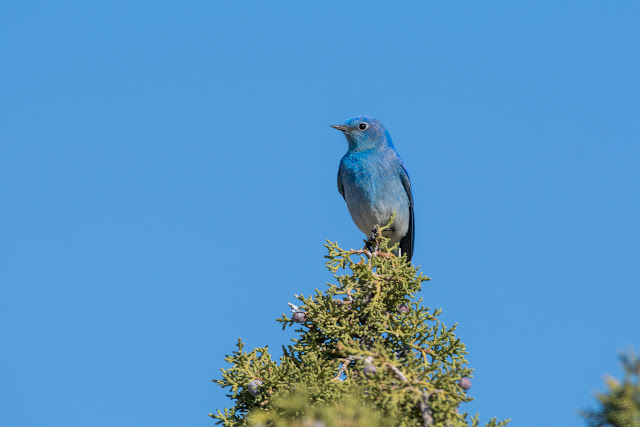 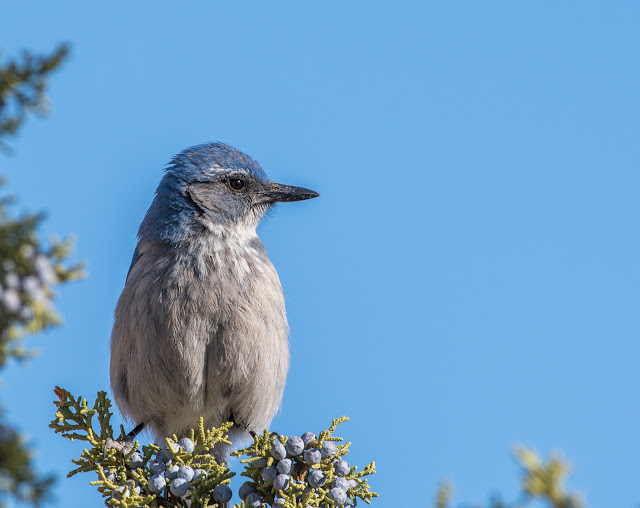 I wanted to stay longer, but spring cleaning awaited me back home. I was already planning my next trip to the desert before I even left Soldier Pass. I was thinking of the Lark Sparrows, Common Nighthawks, Flycatchers, Vireos, reptiles, and more that would be adding new life to the desert in the next few weeks and months.

True to my habits, I stopped one more time along the route home because I saw a family of Yellow-bellied Marmots moving along a rock embankment on the Jordan River.

I keep asking myself if I missed a wonderful career based on nature and the outdoors, but I have been tremendously blessed in my career and I have a nice mix of people, work, and income that allow nature to be a bit of icing on the cake. I'll enjoy it as I can. As my Blogger bio states, "I love people and nature and the places they meet" (minus the part where people destroy the natural places they find).
Posted by Jeff Cooper at 4:12 PM 19 comments: