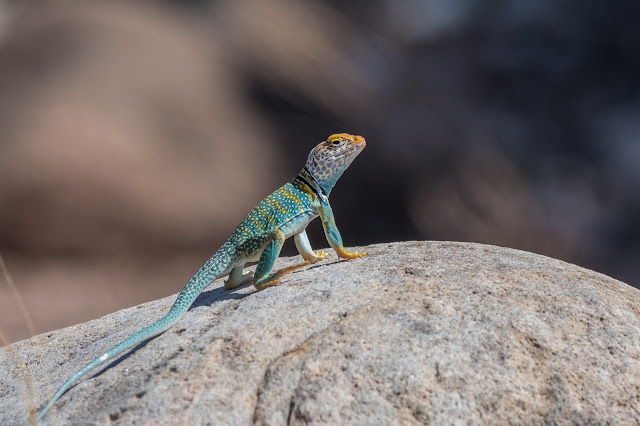 Where Are You Going?

Some people think I'm crazy. I'm okay with that. I'm aware that I enjoy doing things few others do. A couple of Fridays ago, for example, up until an hour before I was planning to "go somewhere" to explore, I was still deciding whether I'd make a solo two-hour drive for an overnight adventure into the Uinta Mountains of northeastern Utah to look for rarely-seen Boreal Owls or a three-plus-hour drive to the Colorado Plateau to search for, observe, and photograph the most colorful lizard species of the American southwest. Yep. In the words of some people who know me well I was willing to drive hours and sleep alone in the wild just for the chance to see a bird or a lizard. For me, however, it's much more than that.  It's a chain of learning moments that are born of the process of exploring, discovering, and observing fascinating creatures and natural events that many people will never know. My brief and sometimes extended outings put aside the busyness of life for the opportunity to have my own Lewis and Clark or Huck Finn adventures. Fortunately for me we have endless wild spaces to explore around the land we call Utah. The desert won over the mountains last Friday night so the nocturnal Boreal Owl adventure remains on the list of fun things to do.

The three-hour drive to my planned location passed quickly as I observed and pondered over the varied and impressive geological features formed over countless years between the Wasatch Range of the Rocky Mountains and the Colorado Plateau. I packed a tent for the night, but I eventually decided to sleep under the stars in the bed of my truck. I texted a GPS location to my wife so she'd know where I would be sleeping and then spent some time stargazing with the help of my SkyView phone app. The International Space Station passed overhead. I was impressed by how bright it was and how quickly it was moving across the night sky. Meteors, Mars, and some constellations drew my attention before eventually getting "some" sleep. 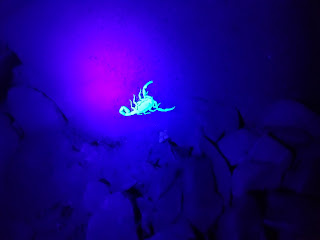 I was up before sunrise and ready to explore so I retrieved my black light to see if a short walk around the surrounding sagebrush habitat would reveal a scorpion or two. This particular image is from a different outing, but I'm sharing it to show how obvious the presence of a scorpion becomes under a black light in the dark. They are nearly impossible to miss under these circumstances.

I arrived at a wash littered with small but ancient boulders shortly after sunrise. The boulders were surrounded by desert sand and sparse vegetation, ideal habitat for collared lizards. Direct sunlight was warming the surface of the rocks, but apparently the seventy-degree temperatures weren't quite warm enough since the first hour of searching proved fruitless. Once the temperatures got into the low eighties, however, brightly-colored Collared Lizards began to appear, almost magically, on to tops of numerous boulders.  I observed the first one from a distance through my binoculars. As the morning went on I was able to learn a few techniques for getting closer observations without causing the lizards to prematurely vacate their rock-top positions for the safety of their hiding places.  Close encounters with lizards often make me feel like I have a link to prehistoric dinosaurs, but during this and other recent hikes to find collared lizards I have actually been fascinated with the thought that the rocks on which I hike and find the lizards literally are older than dinosaurs.

I hope you enjoy this small collection images representing both males and females. I look forward to revisiting the Colorado Plateau to spend more time with this species and one more target species, the Long-nosed Leopard Lizard.

The first two images show the orange/red markings that appear on females during the breeding seasons. These colors fade once the female has deposited her eggs. 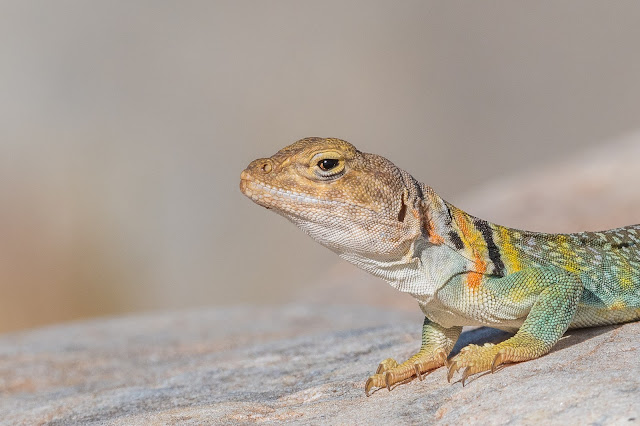 This male looked more like the Great Basin Collared Lizards I find closer to home. It has the large head and bolder throat marks of a male, but it lacks the bright colors associated with males. 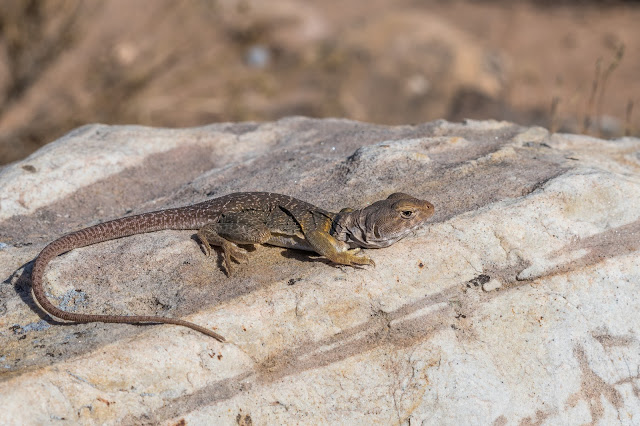 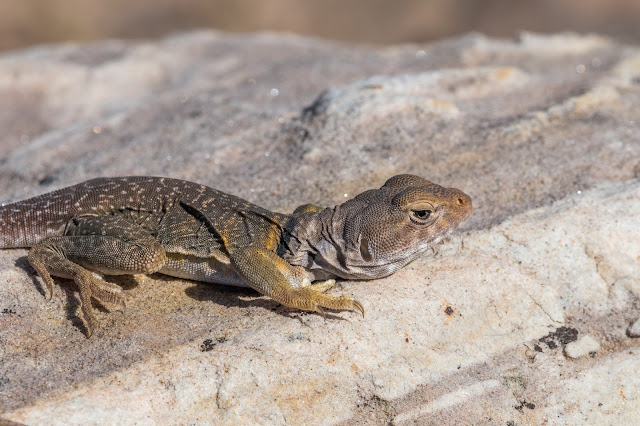 Here's another female. She lacks the spots and coloring found on the throats of males. 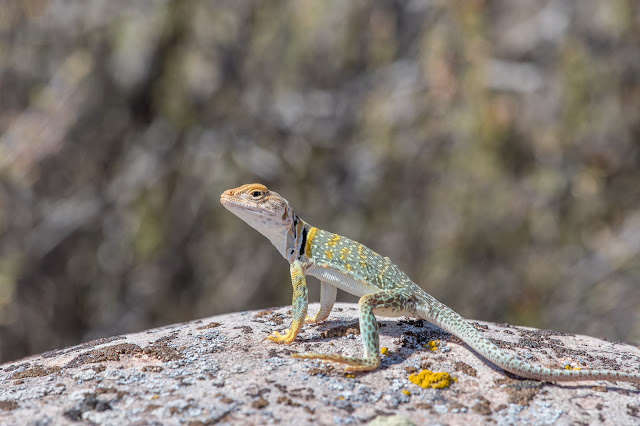 This male has bolder spots on the face and throat, but the green is somewhat moderate compared to other males. I saw some males that appeared to be more blue than green, but I was unable to capture images of them. 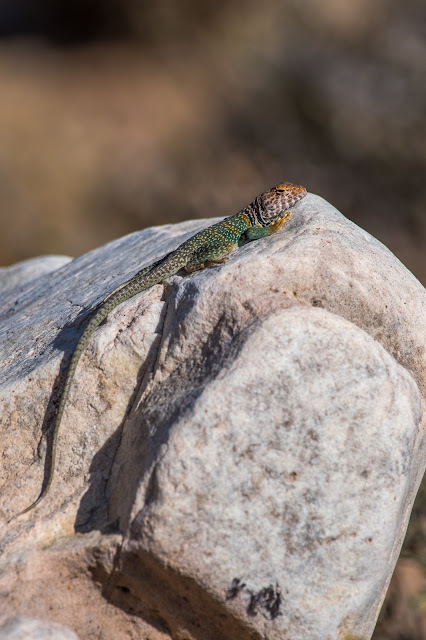 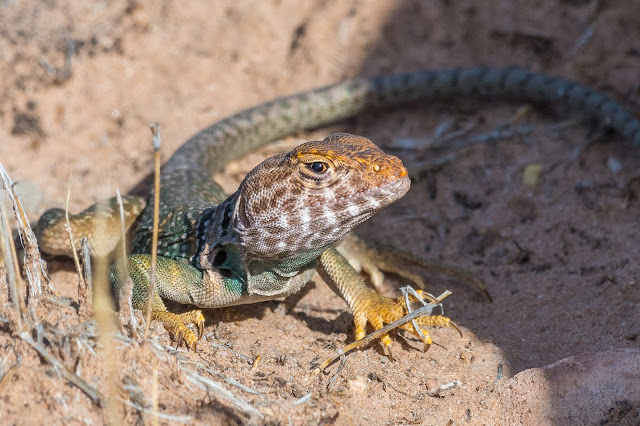 I'll wrap up this post with a couple of images of one more male and a few Eastern Collared Lizard facts. 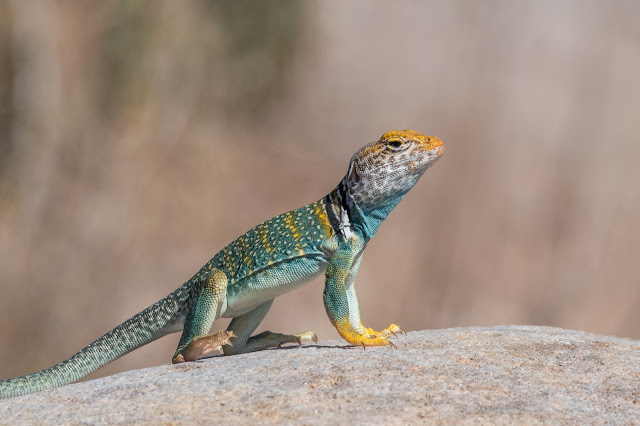 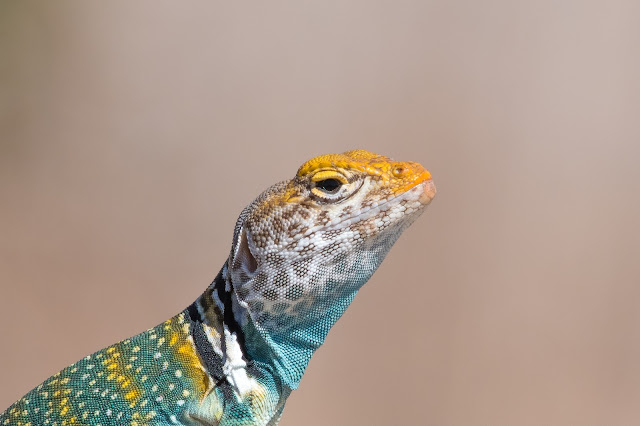